The cable channel under NBC News is now all but a bona fide organ of state propaganda, an information channel that speaks in the same dominant voice as the... 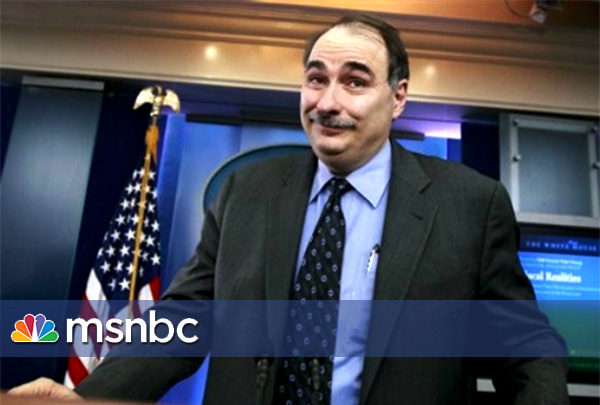 The cable channel that flies under the banner of NBC News is now all but a bona fide organ of state propaganda, an information channel that speaks in the same dominant voice as the folks running the government — and tries to mask what it is up to.

Has NBC become the official state-run news outlet for the Obama deception?

I didn’t plan on getting all free-press-and-democracy amped up about the hirings until I saw Axelrod with Andrea Mitchell last week in his first appearance on MSNBC. It was Echo Chamber Politics 101 with Axelrod characterizing some Republicans in Congress as irrationally wanting the draconian cuts of the sequester –as “dangerous” as that thinking is.

Mitchell started out a remote interview with Axelrod, who was in Chicago, by asking about the sequester set to take effect Friday.

“Remember,” he says, “the cuts put into place were so odious it was thought no rational legislator, no rational government official, would allow it to happen.”

As Mitchell starts to pivot to another issue with a new question, Axelrod interrupts her with, “One more thing, Andrea. There is a belief among some Republicans in Congress that maybe this sequester’s all right. Maybe this is another way of shrinking government in a dramatic way. That’s a dangerous idea, but it’s not uncommon in some quarters on Capitol Hill.”

“No doubt,” Mitchell says, placing a cherry atop this propaganda sundae.

Who cares what MSNBC does as long as the network is open about it? Before being hired officially, Gibbs and Axelrod came on MSNBC and NBC all the time portraying Republicans as irrational. And usually when they did, a network anchor like Andrea Mitchell would put a cherry atop their propaganda sundae.

Putting Gibbs and Axelrod on the payroll is an act of honesty.

After all, the only difference between MSNBC and the Washington Post, New York Times, ABC, NBC, CNN, PBS and the rest, is that MSNBC doesn’t hide the fact that it’s a State propaganda organ. source- Brietbart