Has Obama had brain surgery? Whatever happened to create that scar, it was clearly something serious. Was it a brain operation? Has it affected his thinking? 'No one is... 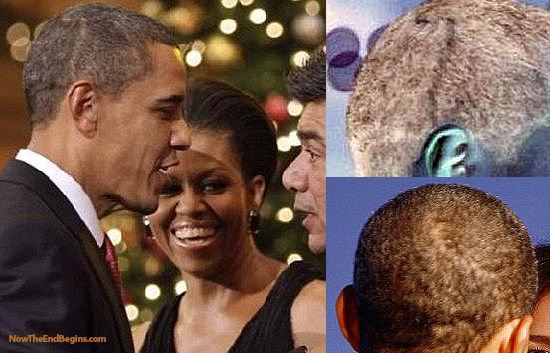 So where did the scars on Obama's head come from...what do we really know about his past?
by Geoffrey Grider April 6, 2011
NOW THE END BEGINS SHARE:

Mystery scars on Obama’s head prompt questions – has the President had brain surgery?

He has been plagued with questions and doubts concerning his background throughout his first term as President. Questions like – is Barack Obama actually American? Is he a Muslim? Is he actually an alien from another planet? – have frequently been asked. The next question circulating on the internet – has President Obama had brain surgery?

So where did the huge scars on Obama's head come from...what do we really know about his past?

Internet blog sites, conspiracy theorists and forums are awash with rumours as to what those mystery scars on the president’s head are from. In pictures, Obama appears to have a long scar which goes up the side of his head and over his crown. Some conspiracy theorists claim they are scars that you would see on someone who has had brain surgery. But without medical records (along with his school records and birth certificate) no one seems to be able to provide an answer as to the cause of the mystery scars. Ben Hart, a blogger for Escape The Tyranny a website which presents itself as a Social Network & Forum For Conservatives, said: ‘Obama’s almost done with his first term, and we still know almost nothing about the background of the President of the United States.

‘Whatever happened to create that scar, it was clearly something serious. Was it a brain operation? Has it affected his thinking? ‘No one is allowed to see his birth certificate. He is just one big mystery man, which adds intrigue to what that huge scar is all about.’ He also said that surgery might explain why the President gets lost speaking without a teleprompter, and posted a video of Obama struggling through a speech, repeating his words and getting lost mid-sentence. source – Daily Mail UK