More than 60 Hamas and Jihad Islami mortar shells and missiles hit Israeli towns, villages and farms on the Israeli side of the Gaza border Friday April 8 and... 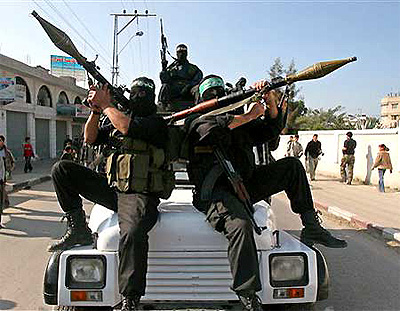 More than 60 Hamas and Jihad Islami mortar shells and missiles hit Israeli towns, villages and farms on the Israeli side of the Gaza border Friday April 8 and injured a civilian. This heightened Israeli fury over Hamas’s attack on a school bus Thursday, April 7, using a sophisticated Cornet anti-tank missile for the first time. A 16-year old boy was critically wounded. This attack was followed by 50 Palestinian rockets and mortar rounds, a blitz which had not abated by Friday night despite constant Israeli counteraction.

Debkafile discloses a less obvious motive behind the mounting violence: Hamas is trying to establish new rules for the conflict on advice and directives coming from its Lebanese ally, Hizballah, to step up its barrage on Israel by 25 percent. The IDF is forced to respond to the resulting escalation in kind.

Our intelligence sources report that Hamas was advised by Hizballah to blitz Israel into relinquishing the 500-meter deep security strip the IDF established inside the Gaza border when Palestinian fire on Israel continued after it was temporarily reduced by the 2009 Cast Lead operation.

Hizballah leaders are telling Hamas they should be able to bring their forward and firing positions right up to the Israeli border, a convenience enjoyed by HIzballah on the Lebanese-Israeli frontier ever since 2000 when Israel quit southern Lebanon.

The IDF is fighting to hold on to this buffer zone to keep Palestinian terrorists back from breaching the border for direct attacks in Israel. The soldiers keep Palestinian gunmen from accessing this strip of land and impose restrictions on Gazan farmers seeking to till their fields in a strip which covers 15 percent of the enclave’s arable land. (Farmers of the Eshkol district on the other side of the border are regularly targeted for attack.)

Hamas is threatening to raise the cross-border violence until Israeli troops pull back to the border. Its anti-tank missile attack on the school bus Thursday was the opening shot of its battle for the buffer zone.” source- DEBKA