As you will see in this funeral for one of their own fallen terrorists, there was an "unexpected surprise" awaiting them. Turns out they don't like death, destruction and... 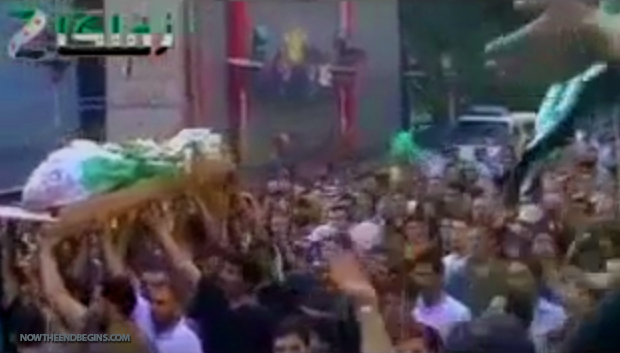 “And it came to pass at noon, that Elijah mocked them, and said, Cry aloud: for he is a god; either he is talking, or he is pursuing, or he is in a journey, or peradventure he sleepeth, and must be awaked. And they cried aloud, and cut themselves after their manner with knives and lancets, till the blood gushed out upon them.” 1 Kings 18:27,28

Islamic terrorism is famous for their stated love of death, destruction and the shedding of blood. They consider it a glorious honor to strap suicide bomb vests onto the bodies of men, women, children and anyone else who is stupid enough to sacrifice their lives to the moon god Allah.

But as you will see in this funeral for one of their own fallen terrorists, there was an “unexpected surprise” awaiting them. Turns out they don’t like death, destruction and the shedding of blood so much when it’s their own.

Someone should have told the funeral director to remove the suicide vest before holding the funeral….the last 30 seconds of this video will horrifically astound you.