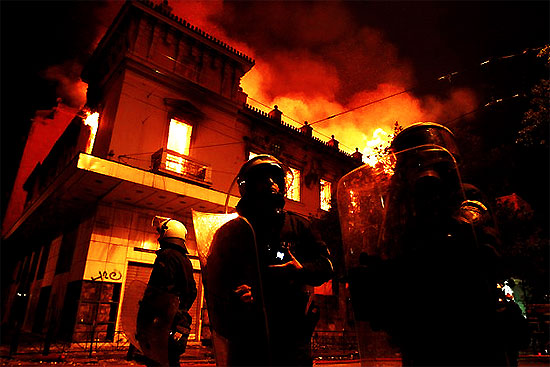 Cinemas, cafes, shops and banks were set ablaze in central Athens and black-masked protesters fought riot police outside parliament before lawmakers voted on the package that demands deep pay, pension and job cuts — the price of a 130 billion euro ($172 billion) bailout needed to keep the country afloat.

State television reported the violence spread to the tourist islands of Corfu and Crete, the northern city of Thessaloniki and towns in central Greece. Police said 150 shops were looted in the capital and 34 buildings set ablaze.

Altogether 199 of the 300 lawmakers backed the bill, but 43 deputies from the two parties in the government of Prime Minister Lucas Papademos, the socialists and conservatives, rebelled by voting against It. They were immediately expelled by their parties.

Asian shares and the euro gained modestly Monday, relieved by the Greek parliament’s passage of austerity measures that put the country a step closer to securing a much-needed bailout fund and avoiding a messy default.

MSCI’s broadest index of Asia Pacific shares outside Japan edged up as much as 0.3 percent on the news.

The rebellion and street violence foreshadowed the problems the Greek government faces in implementing the cuts, which include a 22 percent reduction in the minimum wage — a package critics say condemns the economy to an ever-deeper downward spiral.

Papademos, a technocrat brought in to get a grip on the crisis, denounced the worst breakdown of order since 2008, when violence gripped Greece for weeks after police shot a 15-year-old schoolboy.

“Vandalism, violence and destruction have no place in a democratic country and won’t be tolerated,” he told parliament as it prepared to vote. source – Yahoo News