If I was a Catholic who loved Jesus Christ, I would be by turns both ashamed and outraged at the shameless political maneuvering of Pope Francis. But then again,... 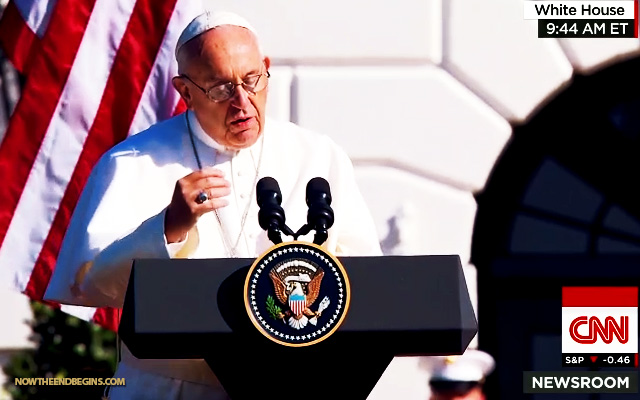 Especially glaring was that Pope Francis had not one word for the 4 hostages suffering in an Iranian prison right now.

“But there were false prophets also among the people, even as there shall be false teachers among you, who privily shall bring in damnable heresies, even denying the Lord that bought them, and bring upon themselves swift destruction.” 2 Peter 2:1 (KJV)

Listening to Pope Francis, the leader of the Catholic religion, is an amazing thing. He comes to America, seizes the world’s attention, opens his mouth and preaches….politics! Barely 2 minutes into his speech, he begins to hammer America on the twin gospels of climate change and illegal immigrants. Not one word about Jesus, not one word about salvation through His shed blood, and only had one veiled reference to God when he said something about “the creator”. He sounded more like a man running for office than someone who claims to be “God’s representative” on this Earth.

“And call no man your father upon the earth: for one is your Father, which is in heaven.” Matthew 23:9 (KJV)

Especially glaring was that Pope Francis had not one word for the 4 hostages suffering in an Iranian prison right now. Surely, such a self-proclaimed champion of human rights would be working day and night to secure their freedom, right? Wrong. Christian pastor Saeed Abedini is an American citizen who Obama has ignored time and again. These 4 men – Saeed Abedini, Amir Hekmati, Jason Rezaian, Robert Levinson –  have been forgotten by both Obama and Pope Francis, and that right there tells you everything you need to know about these two end times deceivers.

If I was a Catholic who loved Jesus Christ, I would be by turns both ashamed and outraged at the shameless political maneuvering of Pope Francis. But then again, the Catholic Church does not follow the Bible, they obey the Vatican. And the last time I checked, the Vatican was a political entity with it’s own currency, it’s own army, and it’s own nation. Pope Francis really is a politician, because he certainly is not a preacher of the gospel of Jesus Christ. He didn’t even mention His Name one time, and yet he calls himself the “vicar of Christ”? Wow. Holy Disconnect there, Batman.

He is exactly what the Bible says he is, the False Prophet.