Google has just acquired Nest for $3.2 billion. Nest had built a thermostat “that adjusts to your living patterns.” It also developed a fire alarm that links to the... 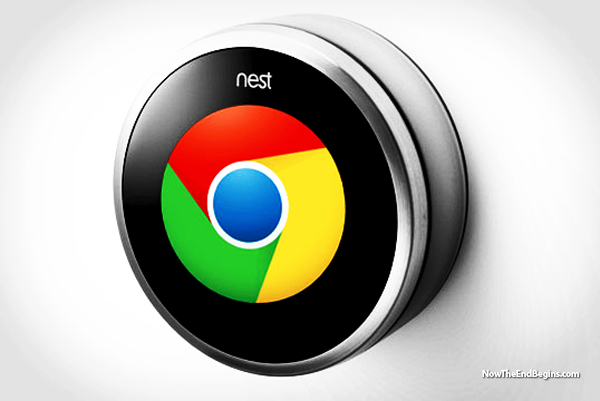 we need to examine why Google gaining a foothold into our houses with home automation devices feels creepier than, say, Xfinity providing us with home security
by Geoffrey Grider January 16, 2014
NOW THE END BEGINS SHARE:

RELATED STORY: See The Companies That Are Spending Billions To Build The Mark Of The Beast (Amazing Videos)

After learning how Google is pairing off with the military and even the NSA, one might be tempted to turn off one’s computer and phone. But what about your thermostat? Google has just acquired Nest for $3.2 billion. Nest had built a thermostat “that adjusts to your living patterns.” It also developed a fire alarm that links to the thermostat. Basically, observers think getting the Nest technology allows Google to learn what we are doing when we are not on the internet.

We need to examine why Google gaining a foothold into our houses with home automation devices feels creepier than, say, Xfinity providing us with home security

Dan Hanon writes for Wired: It’s not just an acquisition — it’s an annexation. The kind that involves planting a flag. Because now we’re talking physical territory, which is the case as the internet inexorably and increasingly reaches into the real world. Simply put: People invited Nest into their houses. Not Google.

It was one thing when services like AdMob got acquired by Google or Flickr and Tumblr got acquired by Yahoo! It’s another thing when the companies — really, their devices and users — getting acquired are services that have a persistent physical presence in our lives. People have always thought of online places as distinct spaces, but with a sense of place comes a sense of territory, belonging, and community.

That’s why, despite Google and Nest’s statements that Nest would remain separate, Google essentially bought its way into your house — literally so if you’re a Nest user. An annexation indeed: You didn’t have a choice. You woke up and the new ruler was in town. There was no resistance. There are no good alternatives to Nest (yet). In fact, gaining users this way is the M&A equivalent of the military shock and awe tactic — rapidly dominating through billions of dollars instead of firepower; imposing will upon user communities without consent.

Hanon critiques Google with another term from the war on terror. “And nowhere in this campaign does anyone put effort into winning hearts and minds.” Do we really want them to? If our household utilities are hooked up to the same database that monitors our online activity, how will they use that information?

Still, we need to examine why Google gaining a foothold into our houses with home automation devices feels creepier than, say, Xfinity providing us with home security. Do we actually trust a cable provider more than we trust Google here — if so, how can that be? I think it’s because Google’s stated mission of organizing the world’s information is in danger of becoming significantly more creepy.

Because there will always be more information to organize. It turns out that “all the information in the world” includes not only streetviews of houses but might even include our heating patterns or when we’re away from home (which, to be fair, Google already knows about because our plane tickets are in Gmail and our searches on its servers). Given the NSA’s known strategy of working with internet companies to get information about people, it would be nice to know exactly what Google was planning to do with their new powers. source – Political Outcast