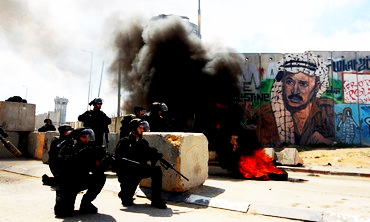 “They are throwing stones, and we are responding,” Aharonovitch said, adding that the protest at Kalandiya is the only demonstration still underway. Sporadic clashes were nonetheless reported in Jerusalem and throughout the West Bank.

Thousands of Palestinian protesters assembled at the Kalandiya checkpoint near Jerusalem in order to stage demonstrations marking the 36th annual Land Day.

Lana Hamadeh, a Palestinian-Canadian from Ottowa, listed demands being made as part of the protest. One of nine delegates in the Canadian Global March to Jerusalem mission, Hamadeh said she and other protesters were demanding “the right of return for Palestinians and the protection of Jerusalem.”

“Non-Jewish holy sites are at risk and the city itself is being ethnically cleansed,” she told The Jerusalem Post. “We are asking for our right to re-enter Jerusalem and reclaim it for everyone, not just for Jews.”

Aharonovitch also said that protesters were throwing stones at the Temple Mount in Jerusalem. Jerusalem police said that 14 people had been arrested throughout the city, including in a protest at the Damascus Gate that police dispersed.

In Bethlehem, dozens of protesters were throwing stones at an IDF checkpoint after breaking through a line of Palestinian police. source – JPost