An international aid flotilla is continuing with plans to sail to the Hamas-ruled Gaza Strip despite a series of setbacks. Pro-Palestinian activists organizing the aid flotilla say they still... 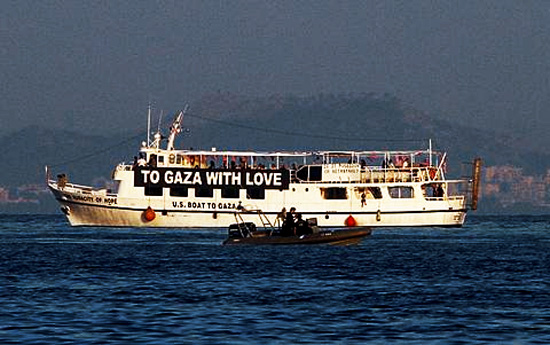 The activist run boat "Audacity of Hope" is escorted by the Greek coast guard in port of Perama, near Athens, Greece, July 1, 2011.
by Geoffrey Grider July 2, 2011
NOW THE END BEGINS SHARE:

A cruise ship for terrorism

An international aid flotilla is continuing with plans to sail to the Hamas-ruled Gaza Strip despite a series of setbacks. Pro-Palestinian activists organizing the aid flotilla say they still intend to challenge Israel’s blockade on Gaza, a day after an American boat was intercepted by the Greek coast guard and turned back to Athens. American Greta Berlin, who was on board the vessel, blames Israel and the United States for the setback.

The activist run boat "Audacity of Hope" is escorted by the Greek coast guard in port of Perama, near Athens, Greece, July 1, 2011.

“The Greek government is under a huge amount of pressure from the Israeli government and probably our own government as well,” said Berlin.

Israel and the U.S. have urged the flotilla not to violate the Gaza blockade, warning that the mission is dangerous and provocative. Last year ago, Israeli naval commandos intercepted a Gaza aid flotilla, and in the botched raid, nine pro-Palestinian activists were killed. The incident sparked international outrage and raised regional tensions. The United Nations and European Union have backed the Israeli and U.S. position, which calls for the flotilla to dock in Israeli or Egyptian ports and transfer their cargo to Gaza legally over land.

Prime Minister Benjamin Netanyahu said Israel has the full right to thwart any attempt to facilitate the smuggling of missiles, rockets and other weapons to what he described as the “Hamas terrorist enclave.”

But activists reject that, charging that the blockade is illegal and immoral. Speaking from Athens, Greta Berlin says the mission to Gaza will go ahead. “Our intent is to sail; it’s always been our intent,” Berlin added. “And we don’t give up very easily. We will continue to sail until Gaza is free.”

Organizers hope to bring up to eight boats and two cargo ships laden with supplies to Gaza, along with about 300 people, including politicians, journalists, writers and religious figures. But two boats have been disabled, allegedly by Israeli sabotage, and now Greece says it will not allow the six ships docked in its ports to depart for Gaza. Because of the delays, dozens of activists have run out of time and returned home. source – VOA News