Israel started drafting 16,000 reserve troops on Friday as Egypt’s prime minister visited the Gaza Strip to show support for Palestinians amid a cross-border conflict with Hamas militants that... 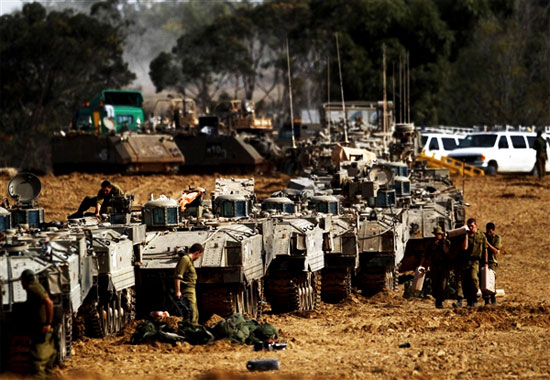 Israel started drafting 16,000 reserve troops on Friday as Egypt’s prime minister visited the Gaza Strip to show support for Palestinians amid a cross-border conflict with Hamas militants that risks spiraling into an all-out war.

Israeli soldiers prepare armored personnel carriers near the border with the Gaza Strip on Friday.

But even as Prime Minister Hesham Kandil arrived for a three-hour visit in the coastal enclave, a temporary cease-fire declared by Israel at Egypt’s request collapsed after both sides accused the other of violating it.

A police spokesman said one rocket fired toward the coastal city fell into the sea. “The rocket landed off the shores of Tel Aviv,” the spokesman told Reuters.

Earlier, Hamas’ military wing also claimed it had struck a building in the southern Israeli town of Ashkelon, NBC’s Ayman Mohyeldin reported. The Israeli newspaper Haaretz reported that the military intercepted four rockets over Ashkelon, but that one exploded in an open area.

It was the second straight day that Gaza militants have targeted Tel Aviv. The attacks, which Israel considers to be a major escalation, could draw an Israeli ground invasion of Gaza closer.

Israeli troops have massed near the Palestinian territory and witnesses said they could see Israeli ships off Gaza’s coast, Mohyeldin reported. Israel’s army would be heavily dependent on reservists to fight any prolonged war. The military has received a green light to call in up to 30,000 reserve troops. source – NBC News