The Turkish military mobilized large numbers of reinforcements from its eastern provinces to the Syrian border on Tuesday, amid rising tension with Damascus, after the downing by Syria of... 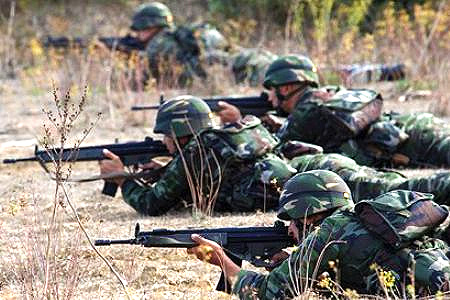 The Turkish military mobilized large numbers of reinforcements from its eastern provinces to the Syrian border on Tuesday, amid rising tension with Damascus, after the downing by Syria of a Turkish Air Force jet on Friday, Turkish media reported. 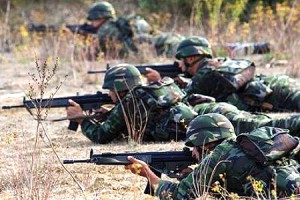 Large numbers of Turkish troops — including at least 15 long-range artillery pieces and tanks – moved to the Syrian frontier from the eastern city of Diyarbakir. A video published by the Turkish Cihan News Agency showed Turkish tanks being transported by carrier trucks toward the frontier.

The mobilization followed statements by Turkish Prime Minister Recep Tayyip Erdogan that the Turkish military will respond to any future violation of its border by Syrian military elements.

“As awe-inspiring as Turkey’s friendship is, Turkey’s wrath is equally awe-inspiring,” Erdogan told the Turkish parliament on Tuesday.

“The rules of engagement of the Turkish Armed Forces have changed,” Erdogan said. “Any military element that approaches the Turkish border from Syria posing a security risk and danger will be regarded as a threat and treated as a military target.”

Erdogan closed his remarks with an especially harsh condemnation of Syrian President Bashar Assad: “Turkey and the Turkish people will continue to provide all support until the people of Syria have been saved from this tyrannical, murderous, bloody dictator and his gang.”

Opposition sources in Syria reported at least 86 civilians were killed by Assad troops on Tuesday.

The father of one of the two missing pilots who were shot down in Friday’s incident told Turkish newspaper Hürriyet Daily News that he opposed Turkey going to war over his son. “It is not appropriate for a country to go to war over a pilot, an airplane or 50 airplanes,” Ali Erton said. He said he was aware of the risks his son took as a military pilot, but added “what matters is that my son serves his country.”

NATO’s North Atlantic Council condemned Tuesday Syria’s downing of the Turkish jet on Friday, but did not recommend military action for the act, as Ankara has requested. At an emergency meeting, requested by Turkey and chaired by NATO secretary-general Anders Fogh Rasmussen, the council clearly denounced Syria’s aggression “in the strongest terms,” calling the shooting down of a Turkish jet over the Mediterranean “unacceptable.”

“It is another example of the Syrian disregard for international norms, peace and security, and human life,” said the NATO chief, expressing his solidarity with Turkey, but making no mention of retaliatory action.

During the meeting, Turkey briefed the North Atlantic Council on the downing Friday of its unarmed RF-4E reconnaissance jet over the Mediterranean Sea. It crashed into the sea a mile inside international waters. The two pilots are still missing.

The discussions were held under Article 4 of NATO’s founding treaty, which allows a NATO member, in this case Turkey, to request consultations if its security has been threatened, officials and diplomats said.

Turkey had asked the meeting be held under article 5, which stipulates an attack on any member country is an attack on all of NATO. Rasmussen said NATO was following the situation closely. “I certainly expect that such an incident will not happen again,” he said.

The secretary-general has also repeatedly said that the alliance would need a clear international mandate, and regional support, before it embarked on a mission in Syria. Last year, NATO launched air attacks on Libyan government targets only after receiving a mandate from the UN Security Council, along with backing from the Arab League.

Syria said the downing was an accident, caused by the “automatic response” of an officer commanding an anti-aircraft position who saw an unidentified jet flying at high speed and low altitude.

But Erdogan said Syria shot down the unarmed plane in international airspace in a “deliberate” and “hostile” act and without warning. He said border violations in the region were not uncommon and that Syrian helicopters violated Turkish airspace five times recently, without Turkish response.

On Monday, Turkey revealed that a search and rescue plane sent to find the downed recon jet had been shot at as well, but did not crash.

The downing of the jet has aggravated tense ties between the two neighbors. Turkey has repeatedly called on Assad to step down as 33,000 Syrians have sought refuge in Turkey, fleeing a government crackdown on a popular uprising.

In Syria’s case, the Arab League hasn’t been able to agree on the need for military intervention. And Russia and China — both veto-wielding members of the Security Council — have consistently shielded Assad’s regime from international sanctions over its violent crackdown on protests. They have called on neighboring countries to refrain from provocative actions that could spark a wider war. source – Times of Israel