From Iran To Cuba, Obama Is Forming Alliances With America’s Enemies

President Barack Obama and Cuban President Raul Castro shook hands on Friday at a summit in Panama, a symbolically charged gesture as the pair seek to restore ties between... 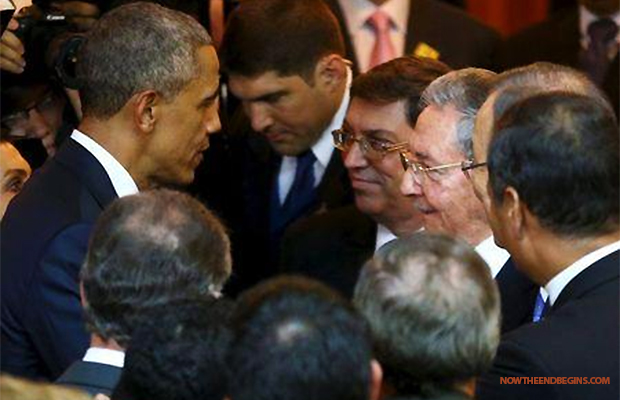 “The days in which our agenda in this hemisphere so often presumed that the United States could meddle with impunity, those days are past,” Obama said.

EDITOR’S NOTE: There is a reason why, until Obama, the United States had no relations with Cuba. They are a hardcore Communist regime in line with Russia, and since the early 1960’s, a sworn enemy of the United States. They have not changed that policy in 2015. But it is precisely because of their Anti-American stance that Obama is so infatuated with wooing them. And to our loyal allies like Israel, he treats with scorn and contempt.

PANAMA CITY – President Barack Obama and Cuban President Raul Castro shook hands on Friday at a summit in Panama, a symbolically charged gesture as the pair seek to restore ties between the Cold War foes.

U.S. President Barack Obama (L) talks with his Cuban counterpart Raul Castro before the inauguration of the VII Summit of the Americas in Panama City April 10, 2015. REUTERS/Peru Presidency/Handout via Reuters

Obama and Castro are expected to meet again on Saturday and talk about their efforts to restore full diplomatic relations and boost trade and travel between the two countries.

Their rapprochement, first unveiled in a historic policy shift in December, is the central issue at the Summit of the Americas meeting in Panama. “The days in which our agenda in this hemisphere so often presumed that the United States could meddle with impunity, those days are past,” he said.

With a potential Iran-US nuclear deal in sight, Secretary of State John Kerry spent much of the past week consulting with allies and reassuring those nervous about the prospect. Prime Minister Benjamin Netanyahu of Israel addressed Congress to warn that the terms as publicly reported would make it a “bad deal,” which would still leave Iran with a nuclear infrastructure that it could use to eventually make bombs.

Obviously, Obama lied through his teeth in this video. In 2015, Obama is wooing Iran and despising Israel. Iran has nuclear reactors and related facilities in Arak, Bushehr, Gachin, Isfahan, Natanz, Parchin and Qom operating 24 hours a day. Read all about it here. America, are you really, really that stupid? Did Obama really place “crippling sanctions” on Iran? Not enough to “cripple” any of Iran’s 7 nuclear power sites, obviously.

In Obama’s Muslim faith, the practice of Taqiyya allows for a Muslim to tell lies and practice deception if it results in the promotion of Islam. This is exactly what Obama does when he is campaigning or giving speeches. He tells you exactly what you want to hear, then when he gets the authority and power he desired, he goes ahead and does what he originally planned to do anyway.

I don’t even recognize America anymore, I truly don’t. The Fourth of July used to be one of my favorite holidays, now it just makes me sad.