Why on earth would the head of Fox News be not only meeting with Obama's main Muslim advisor Valerie Jarrett for any reason, much less a strategy-planning breakfast meeting... 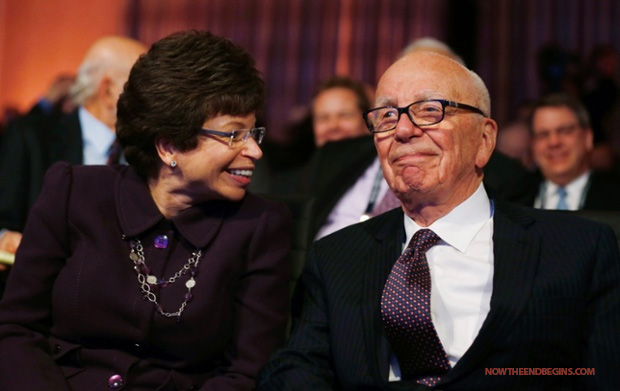 The powers that be want nothing more than for you and I to believe the completely false construct of the Conservative-vs-Liberal paradigm. The reality of the situation is that there is one group pulling the strings, and they have created false flags to wave that both sides rally around. Fox News is no exception to this.

“Can two walk together, except they be agreed?” Amos 3:3

No where is this seen more clearly than in last Tuesday’s dinner meeting between core Obama advisor and Sunni Muslim Valerie Jarrett and Fox News CEO Rupert Murdoch. The Washington Examiner reported that  the two dined at the posh Blue Duck Tavern on Tuesday night in Washington’s Foggy Bottom, and Jarrett described the evening as “very enjoyable.”

“Good policy sometimes makes strange bedfellows,” she told reporters at a breakfast hosted by the Christian Science Monitor Friday, adding that she was impressed by Murdoch’s passion for passing comprehensive immigration reform.

Why on earth would the head of Fox News be not only meeting with Obama’s main Muslim advisor for any reason, much less a strategy-planning breakfast meeting to discuss flooding America with illegal immigrants? Because Fox News is a fake, a total sham. They are a Muslim-front organization that’s filled with homosexuals and liberals, whose #2 owner is Prince Alwaleed from Saudi Arabia. Having spent years getting millions of Americans to trust and believe in their highly-biased and false programming, they now plan on leading Conservative America right into the lion’s den of Islam and Sharia Law.

Number one ratings attraction on Fox News, Bill O’Reilly, recently cooed that in his opinion, “Barack Hussein Obama is a patriot”. That should tell you the reliability of  the content on his O’Reilly Factor program. Muslim Prince Alwaleed owns the largest chunk of News Corp. stock outside the Murdoch family. Shortly after his purchase of 5.5 percent of News Corp. voting shares in 2005, Alwaleed gave a speech that made it clear just what he had bought. As noted in The (U.K.) Guardian, Alwaleed told an audience in Dubai that it took just one phone call to Rupert Murdoch — “speaking not as a shareholder but as a viewer,” Alwaleed said — to get the Fox News crawl reporting “Muslim riots” in France changed to “civil riots.”

Fox News is the ultimate false flag operation, in bed with Muslim owners and now with the Obama-Jarrett White House planning the best way to flood America with millions of illegal immigrants so the system will collapse. They are not “patriots”, and they are counting on you to be the “pinhead”.

And that’s the memo…