Cathedral officials says the church will be among the first to implement a new rite of marriage for gay, lesbian, bisexual and transgender members. The church announced its new... 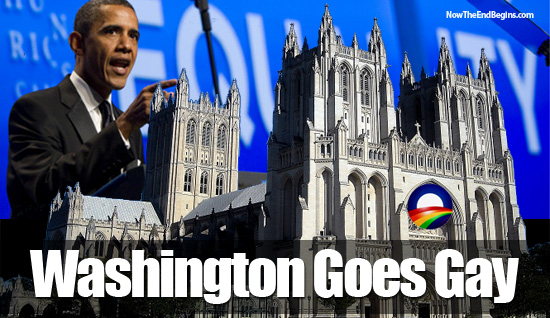 God will have to judge America

“Wherefore God also gave them up to uncleanness through the lusts of their own hearts, to dishonour their own bodies between themselves: Who changed the truth of God into a lie, and worshipped and served the creature more than the Creator, who is blessed for ever. Amen. For this cause God gave them up unto vile affections: for even their women did change the natural use into that which is against nature: And likewise also the men, leaving the natural use of the woman, burned in their lust one toward another; men with men working that which is unseemly, and receiving in themselves that recompence of their error which was meet.” Romans 1

Cathedral officials tell The Associated Press the church will be among the first Episcopal congregations to implement a new rite of marriage for gay, lesbian, bisexual and transgender members. The church announced its new policy Wednesday.

Obama has kept one promise – change.

As the nation’s most prominent church, the decision carries huge symbolism. The 106-year-old cathedral has long been a spiritual center for the nation, hosting presidential inaugural services and funerals for Ronald Reagan and Gerald Ford. The Rev. Martin Luther King Jr. delivered his last sermon there in 1968. The cathedral draws hundreds of thousands of visitors each year.

In light of the legality of same-sex marriage in the District of Columbia and now Maryland, the Rt. Rev. Mariann Edgar Budde, the Episcopal bishop of Washington, decided in December to allow an expansion of the Christian marriage sacrament. The diocese covers the district and four counties in Maryland. The change is allowed under a “local option” granted by the church’s General Convention, church leaders said. Each priest in the diocese can then decide whether to perform same-sex unions.

The Very Rev. Gary Hall, the cathedral’s dean, said performing same-sex marriages is an opportunity to break down barriers and build a more inclusive community “that reflects the diversity of God’s world.”

“I read the Bible as seriously as fundamentalists do,” Hall told the AP. “And my reading of the Bible leads me to want to do this because I think it’s being faithful to the kind of community that Jesus would have us be.”

Celebrating same-sex weddings is important beyond the Episcopal Church, Hall said. Church debate is largely settled on the matter, allowing for local decisions, he said.

The move is also a chance to influence the nation

Hall is the 10th dean of the cathedral and began serving there in October 2012. He has been an ordained minister for more than 35 years. He said he has long been an advocate for gay marriage and began performing same-sex blessings in 1990 when he served at All Saints Church in Pasadena, Calif.

“Today, the church sent a simple but powerful message to LGBT Episcopalians – you are loved just the way you are, and for that we embrace you,” said the Rev. MacArthur Flournoy, the deputy director of HRC’s religion and faith program.

The conservative National Organization for Marriage, which opposes same-sex marriage, said the cathedral’s change was “disappointing but not surprising,” given the direction of the Episcopal Church.

“The message here is that conservative Episcopalians are being pushed out,” said spokesman Thomas Peters.

In light of the cathedral’s national prominence, Peters called the marriage announcement “an opportunity for people to wake up to what’s happening.”

“It reminds us that marriage is really an all or nothing deal,” he said. “Does America want to retain its marriage tradition or fundamentally give it up?”

Gay weddings will be allowed immediately. But it will likely be six months to a year before the first marriages are performed due to the cathedral’s busy schedule and its pre-marital counseling requirement. Generally, only couples affiliated with the cathedral will be eligible. Church leaders had not received any requests for weddings ahead of Wednesday’s announcement.

While Hall does not expect any objections within the National Cathedral congregation, he said the change may draw criticism from outside. It may be divisive for some, just as it was to preach against segregation or to push for the ordination of women, Hall said.

The New York-based Episcopal Church is the U.S. body of the 77 million-member Anglican Communion. The House of Bishops voted last year 111-41 to authorize a provisional rite for same-sex unions. Some congregations have left the church over its inclusion of gays and lesbians over the years.

Same-sex marriage is now legal in nine states and the District of Columbia. Legislators in Illinois and Rhode Island are set to take up bills to possibly join them, and the Supreme Court is scheduled to hear cases on gay marriage in March.

Hall, the cathedral dean, said the church has a long history of taking stands on public issues. But he said he sees marriage as a human issue, not a political issue.

“For us to be able to say we embrace same-sex marriage as a tool for faithful people to live their lives as Christian people,” he said, “for us to be able to say that at a moment when so many other barriers toward full equality and full inclusion for gay and lesbian people are falling, I think it is an important symbolic moment.” source – AP