Forbes Reveals Obama’s Plan To Seize Control Regardless Of Congress

The most ominous sign of possible things to come appeared on March 16, 2012, when President Obama signed executive order 13603 about “National Defense Resources Preparedness.”... 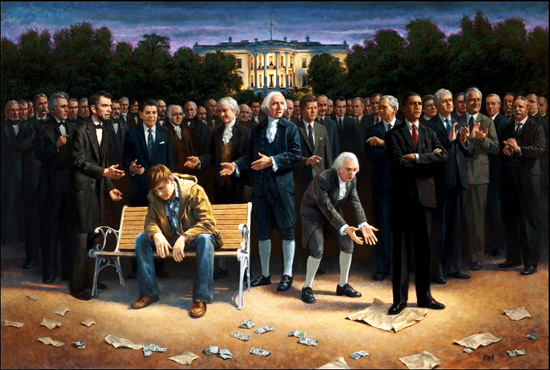 Emboldened by the past 3 years of the most liberal President in American history, it is becoming fashionable to speak openly against the US Constitution and the works of our Founding Fathers
by Geoffrey Grider September 18, 2012
NOW THE END BEGINS SHARE:

President Obama has made clear that he’s determined to continue pushing his “progressive” agenda, regardless of constitutional limitations on his power.  He aims to have his way by issuing more and more executive orders.

Emboldened by the past 3 years of the most liberal President in American history, it is becoming fashionable to speak openly against the US Constitution and the works of our Founding Fathers

The most ominous sign of possible things to come appeared on March 16, 2012, when President Obama signed executive order 13603 about “National Defense Resources Preparedness.”

This 10-page document is a blueprint for a federal takeover of the economy that would dwarf the looming Obamacare takeover of the health insurance business.  Specifically, Obama’s plan involves seizing control of:

*  “All forms of civil transportation”

*  “All usable water from all sources”

Moreover, federal officials would “issue regulations to prioritize and allocate resources.” Each government bureaucracy “shall act as necessary and appropriate.” To be sure, much of this language has appeared in national security executive orders that previous presidents have issued periodically since the beginning of the Cold War.

But more than previous national security executive orders, Obama’s 13603 seems to describe a potentially totalitarian regime obsessed with control over everything.  Obama’s executive order makes no effort to justify the destruction of liberty, no effort to explain how amassing totalitarian control would enable government to deal effectively with cyber sabotage, suicide bombings, chemical warfare, nuclear missiles or other possible threats.  It’s quite likely there would be greater difficulty responding to threats, since totalitarian regimes suffer from economic chaos, colossal waste, massive corruption and bureaucratic infighting that are inevitable consequences of extreme centralization. Such problems plagued fascist Italy, Nazi Germany, the Soviet Union, communist China and other regimes.  Totalitarian control would probably trigger resistance movements and underground networks like those that developed in Western Europe during the Nazi occupation.  Totalitarian control could provoke more political turmoil than there was in the Vietnam War era of the 1960s.  There would probably be a serious brain drain as talented people with critical skills escaped to freedom wherever that might be.  Canada?

There’s nothing in executive order 13603 about upholding the Constitution or protecting civil liberties. source – Forbes