"We want people to call us if the guy down the street says he hates the government" says Palm Beach County Sheriff Ric Bradshaw... 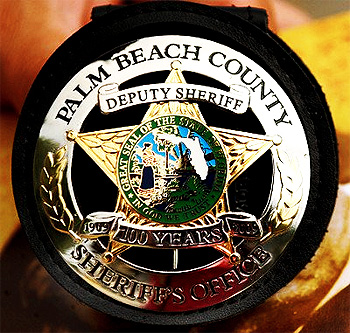 Florida House and Senate budget leaders have awarded Palm Beach County Sheriff Ric Bradshaw $1 million for a new violence prevention unit aimed at preventing tragedies like those in Newtown, Conn., and Aurora, Colo., from occurring on his turf.

Bradshaw plans to use the extra $1 million to launch “prevention intervention” units featuring specially trained deputies, mental health professionals and caseworkers. The teams will respond to citizen phone calls to a 24-hour hotline with a knock on the door and a referral to services, if needed.

The goal will be avoiding crime — and making sure law enforcement knows about potential powder kegs before tragedies occur, Bradshaw said. But the earmark, which is a one-time-only funding provision, provoked a debate Monday among mental health advocates and providers about the balance between civil liberties, privacy and protecting the public.

Bradshaw said his proposal is a first-of-its-kind in the nation, and he hopes it will become a model for the rest of the state like his gang prevention and pill-mill units.

“Every single incident, whether it’s Newtown, that movie theater, or the guy who spouts off at work and then goes home and kills his wife and two kids — in every single case, there were people who said they knew ahead of time that there was a problem,” Bradshaw said. “If the neighbor of the mom in Newtown had called somebody, this might have saved 25 kids’ lives.”

Bradshaw is readying a hotline and is planning public service announcements to encourage local citizens to report their neighbors, friends or family members if they fear they could harm themselves or others.

The goal won’t be to arrest troubled people but to get them help before there’s violence, Bradshaw said. As a side benefit, law enforcement will have needed information to keep a close eye on things.

“We want people to call us if the guy down the street says he hates the government, hates the mayor and he’s gonna shoot him,” Bradshaw said. “What does it hurt to have somebody knock on a door and ask, ‘Hey, is everything OK?’ ”

He said he met with Bradshaw about the program and “got assurances from the sheriff that this is going to be done in a way that respects people’s autonomy and privacy, and that he makes sure to protect against people making false claims.”

Mental health advocates, however, worry about a potential new source of stigma, and the potential for erosion of the civil rights of people with mental illnesses.

“How are they possibly going to watch everybody who makes a comment like that? It’s subjective,” said Liz Downey, executive director of the Palm Beach County branch of the National Alliance on Mental Illness. “We don’t want to take away people’s civil liberties just because people aren’t behaving the way we think they should be.”

Bradshaw acknowledged the risk that anyone in a messy divorce or in a dispute with a neighbor could abuse the hotline. But, he said, he’s confident that his trained professionals will know how to sort out fact from fiction.

“We know how to sift through frivolous complaints,” he said.

The proposal still needs the blessing of Gov. Rick Scott, who has line-item veto authority.

But if it goes forward, Palm Beach County’s already stretched mental health and substance abuse providers could find themselves even busier. There is no ready source of funds once the $1 million runs its course, as there hasn’t been an increase to community mental health funding in many years.

“Our community agencies throughout the state don’t have the funds to meet the needs they have currently,” said Bob Sharpe, CEO of the Florida Council for Community Mental Health. “It sounds like it could work, but with no new funding we’d have to find it within existing resources.”

If Bradshaw’s teams can keep people out of crisis units and promote early intervention, that has the potential to save money, said Ann Berner, CEO of the Southeast Florida Behavioral Health Network, which manages mental health care payments for the state.

To be successful, however, there will have to be close coordination with the mental health providers, she said. For example, the county already pays for mobile crisis response teams at two nonprofit mental health providers, a service that includes a 24-hour crisis call center. They, too, are trained to de-escalate conflicts and refer troubled people to care. Which ones will respond when there’s a call from a school or a home? That will have to be clarified.

Also, after troubled people are identified by Bradshaw’s teams, then what? Who will pay for their care? The state? Medicaid? The county? The Palm Beach County Public Defender has a good program to ensure qualified people apply for the Social Security and Medicaid benefits they may need, she said. Some high-level conversations have started, but more are needed, Berner added.

“I think that would be an area we really need to collaborate on, and soon,” she said.

The $1 million Bradshaw won represents a third of what he had sought from the Legislature, but it’s a 10-fold bump from what was originally earmarked before House and Senate budget leaders finalized the state’s $74 billion budget over the weekend. source – Palm Beach Post