“It was a Navy missile that killed all those people, that shot down Flight 800,” Salinger was saying from his home in France. “I have proof, a document given... 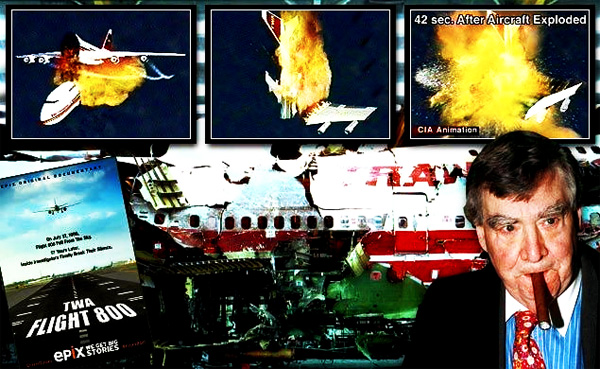 Renderings distributed by the CIA indicate TWA 800 blew up in midair and crashed into the sea 42 seconds later.
by Geoffrey Grider July 8, 2013
NOW THE END BEGINS SHARE:

It was almost 20 years ago that I found myself on the phone with John F. Kennedy’s legendary press secretary, Pierre Salinger. Salinger was hawking a conspiracy theory — but not one dealing with the assassination of his dear friend in Dallas decades earlier.

Renderings distributed by the CIA indicate TWA 800 blew up in midair and crashed into the sea 42 seconds later.

We were talking about a more recent tragedy off Long Island.

“It was a Navy missile that killed all those people, that shot down Flight 800,” Salinger was saying from his home in France. “I have proof, a document given to me by the French government.”

Salinger, who had recently retired from a stint as a correspondent for ABC News, believed wholeheartedly that the explosion of the TWA jumbo jet just minutes after takeoff was an accident caused by U.S. armed forces.

“What I have is irrefutable proof,” he said. “A document no one will be able to dispute.”

This comes back to me now (and it helps that I saved my notes from that interview) because Epix is airing “Flight 800,” a new documentary supporting the missile theory, on July 17 — the 17th anniversary of the tragedy.

When the crash was still fresh in everyone’s mind, I had reached out to the former Beltway insider in the course of reporting for another newspaper about Oliver Stone’s interest in producing a TV movie about TWA Flight 800.

Given Stone’s treatment of the Kennedy assassination in his famous 1991 film “JFK,” Salinger’s ties to Kennedy and his sudden spate of media appearances related to the TWA crash, I hoped he might be able to offer some context.

Instead, Salinger was pushing his belief that friendly fire had destroyed Flight 800. He said a French intelligence agent had given him the key document.

In fact, Salinger’s document turned out be an email written by Richard Russell, a former United Airlines pilot who had investigated crashes for the Air Line Pilots Association. The National Transportation Safety Board quickly denounced it as total bunk, and continues to say strenuously that it never found any evidence that a missile destroyed the plane.

Russell’s email had been floating around on the Web for a few weeks before Salinger saw it. And once he did, his unshakable belief, gravitas and reputation gave the claim weight.

After Salinger got involved, the missile theory became so prevalent that “Pierre Salinger syndrome” — the belief that everything on the Internet is true — entered the lexicon. Salinger had allegedly been suffering from dementia for several years when he died in 2004 near his home in Le Thor, France, at the age of 79.

The missile theory, on the other hand, simply refuses to die. source – NY Daily News