The flames from the 108-square-mile fire have reportedly reached as close as 50 feet from the grounds. With a wildfire so close, lab officials, along with government officials such... 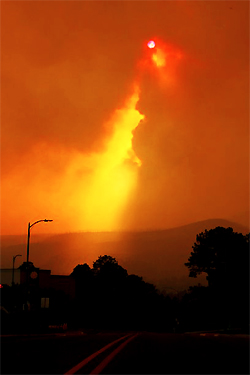 The wildfire that surrounds the nuclear lab in Los Alamos, New Mexico, has grown to at least 61,000 acres amid mounting concerns about what might be in the smoke that’s visible from space.

Such fear has prompted the Environmental Protection Agency to bring in air monitors, along with a special airplane that checks for radiation levels. So far officials have not been able to find anything.

The Los Alamos facility — the birthplace of the atomic bomb — was shrouded in secrecy long before it was surrounded by smoke after the Las Conchas fire began Sunday.

“It contains approximately 20,000 barrels of nuclear waste,” former top security official Glen Walp said. “It’s not contained within a concrete, brick and mortar-type building, but rather in a sort of fabric-type building that a fire could easily consume.

“Potential is high for a major calamity if the fire would reach these areas,” he added.

The flames from the 108-square-mile fire have reportedly reached as close as 50 feet from the grounds. With a wildfire so close, lab officials, along with government officials such as New Mexico Governor Susana Martinez, are trying to reassure the public of the plant’s safety.

“I’m confident in saying that they are committed to making it safe,” Martinez told ABC News. source – ABC News