“We want the world to see the Christian community is partnering with us and is supporting us.” said Rizwan Jaka, a spokesman with the prominent ADAMS mosque in Sterling,... 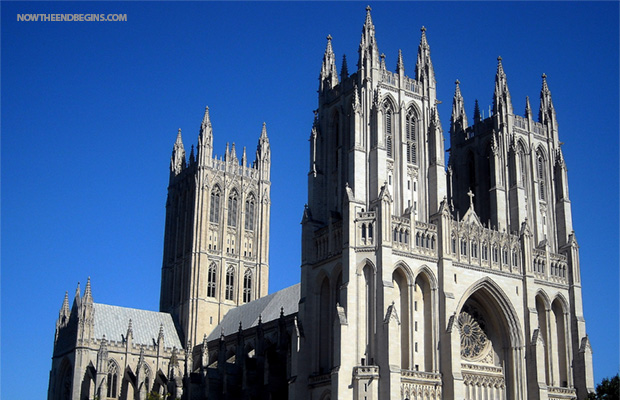 “And for this cause God shall send them strong delusion, that they should believe a lie:” 2 Thessalonians 2:12

There is a rapidly-growing movement within the professing Christian denominations to blend Islam with Christianity, we call this bastard hybrid Chrislam. Some of the most well-known figures in religious circles are behind it. People like Pope Francis, Rick Warren, Hillsong United, Kenneth Copeland and scores of others. It is evil.

Let no one deceive you, biblical Christianity has nothing in common with Islam, and never will. If your church begins to incorporate any aspect of Islam into it’s physical building or worship service, run away as fast as you can.

The cathedral, part of the Episcopal Church, has long held high-profile interfaith events, and some mosques hold services in synagogues or churches if they need overflow space. But organizers said Monday that they are seeking to make a statement by having Muslim leaders come and hold their midday service in such a visible Christian house of worship.

“We want the world to see the Christian community is partnering with us and is supporting our religious freedom in the same way we are calling for religious freedom for all minorities in Muslim countries,” said Rizwan Jaka, a spokesman with the prominent ADAMS mosque in Sterling, Va., one of the co-sponsors of Friday’s service. “Let this be a lesson to the world.”

This is what needs to happen on Friday:

The service, which will begin around 12:20 and is for invited guests only, developed out of a relationship between the cathedral’s director of liturgy, the Rev. Gina Campbell, and the South African ambassador to the United States, Ebrahim Rasool, who is Muslim. The two worked together on a memorial service for Nelson Mandela, Jaka said.

“This is a dramatic moment in the world and in Muslim-Christian relations,” Rasool said in a prepared statement. “This needs to be a world in which all are free to believe and practice and in which we avoid bigotry, Islamaphobia, racism, anti-Semitism, and anti-Christianity and to embrace our humanity and to embrace faith.”