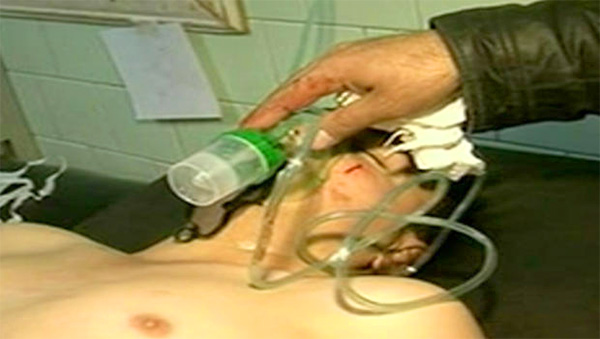 An image from Syrian state television shows a man being treated in an Aleppo province hospital after an alleged chemical weapons attack, March 19, 2013. / Syrian State TV

Neither of the accusations could immediately be verified, but a photographer for the Reuters news agency did say he had witnessed people come into hospitals with breathing problems after the attack. The Syrian state news agency SANA said “terrorists” had fired a rocket “containing chemical materials” into the area around the village of Khan al-Assal in the northern province of Aleppo. The regime regularly uses the term terrorists to refer to rebels fighting to overthrow authoritarian President Bashar Assad.

“The rocket which was launched from Kafr Da’el in Neirab is a grave escalation,” Syrian information minister Omran al-Zubi said in a televised statement. “The terrorists used a weapon that is banned in accordance with international law.”

“The states which are arming, financing and housing the terrorists should be questioned about this crime,” added al-Zubi.

“I saw mostly women and children,” the Reuters photographer, who was not identified, told his editors. He said after visiting the University of Aleppo hospital and the al-Rajaa hospital — both in state-controlled parts of Aleppo — that victims “said that people were suffocating in the streets and the air smelt strongly of chlorine.”

SANA said at least 16 people, most of them civilians, were killed and almost 90 more wounded. An activist in the area said rebels had recently seized much of the village of Khan al-Assal including a facility that housed a military academy. The opposition Syrian Media Center said 20 people had died from “asphyxia and poisoning after a SCUD missile fired from Damascus struck” Khan al-Assal. source CBS News