Are The FEMA Coffin Liners For Ebola Virus Victims?

If the current outbreak of the Ebola virus was indeed concocted in a government lab, then certainly you would need a lot of cheap, readily-available containers in which to... 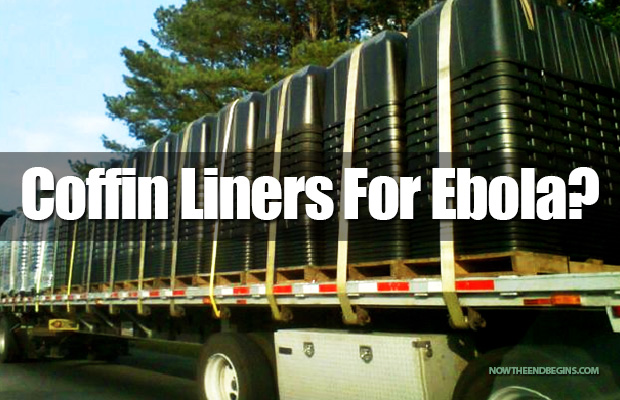 Why does the United States government hold patent US20120251502 for the Ebola virus?

For years now, you have all seen the photos and watched the videos of the millions of black plastic coffin liners that the United States government has been stockpiling. Much speculation has been given over as to the reasons why the government might need such a large amount of coffin liners. Until now.

If the current outbreak of the Ebola virus was indeed concocted in a government lab, then certainly you would need a lot of cheap, readily-available containers in which to put the dead bodies. But it wouldn’t even have to be something created in a lab, it would just have to be an epidemic that is allowed to grow unchecked. Kinda like ISIS has been in the Middle East, and kinda like Iran’s nuclear program. You get the idea. But here’s a fact or two you may not have been told:

The US Government is so interested in Human Ebola Viruses (various strains) that they secured a patent on the viruses, various mutations, testing, treatments, and reproduction of the viruses. The US Pub No: US 2012/0251502 A1 was issued Oct. 4, 2012. The CDC is also concerned with Lassa Fever Virus from West Africa. Though less fatal than Ebola, it is much easier to transmit from very fine air droplets. This raises the increase of serious risk for health care workers in West Africa, if a patient has both viruses. Because it is the most common hemorrhagic fever, and is also a biodefense Category A. This virus and reproduction of it has a patent by The Administrators of the Tulane Educational Fund. Patent EP2478103A2-Lassa virus-like particles and methods of production thereof (July, 25, 2012).

USAMRIID has also proven in studies of Ebola that it quite infectious via the airborne in animals and has already crossed species from animals to different animals and then to humans in West Africa,http://vet.sagepub.com/content/50/3/514.long .

Here is a Google link for the US Patent Office information on the patent issued to the United States Government for Human Ebola Virus Species and Compositions and Methods Thereof mentioned in the paragraphs above. This is not theory of any kind, conspiracy or otherwise. This is fact.

Just something for you to consider.