Information about every Trident missile the US supplies to Britain will be given to Russia as part of an arms control deal signed by President Barack Obama next week.... 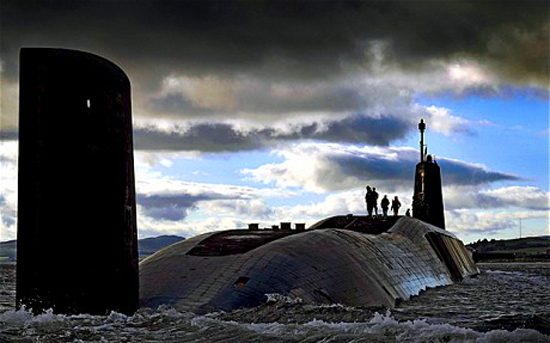 The US secretly agreed to give the Russians sensitive information on Britain’s nuclear deterrent to persuade them to sign a key treaty, The Daily Telegraph can disclose.

HMS Vanguard is Britain's lead Trident-armed submarine. The US, under a nuclear deal, has agreed to give the Kremlin the serial numbers of the missiles it gives Britain Photo: TAM MACDONALD

Information about every Trident missile the US supplies to Britain will be given to Russia as part of an arms control deal signed by President Barack Obama next week. Defence analysts claim the agreement risks undermining Britain’s policy of refusing to confirm the exact size of its nuclear arsenal. The fact that the Americans used British nuclear secrets as a bargaining chip also sheds new light on the so-called “special relationship”, which is shown often to be a one-sided affair by US diplomatic communications obtained by the WikiLeaks website.

Details of the behind-the-scenes talks are contained in more than 1,400 US embassy cables published to date by the Telegraph, including almost 800 sent from the London Embassy, which are published online today. The documents also show that:

• America spied on Foreign Office ministers by gathering gossip on their private lives and professional relationships.

• Intelligence-sharing arrangements with the US became strained after the controversy over Binyam Mohamed, the former Guantánamo Bay detainee who sued the Government over his alleged torture.

• David Miliband disowned the Duchess of York by saying she could not “be controlled” after she made an undercover TV documentary.

• Tens of millions of pounds of overseas aid was stolen and spent on plasma televisions and luxury goods by corrupt regimes.

A series of classified messages sent to Washington by US negotiators show how information on Britain’s nuclear capability was crucial to securing Russia’s support for the “New START” deal.

Although the treaty was not supposed to have any impact on Britain, the leaked cables show that Russia used the talks to demand more information about the UK’s Trident missiles, which are manufactured and maintained in the US.

Washington lobbied London in 2009 for permission to supply Moscow with detailed data about the performance of UK missiles. The UK refused, but the US agreed to hand over the serial numbers of Trident missiles it transfers to Britain. source – Telegraph UK