The CIA considers Israel its No. 1 counterintelligence threat in the agency's Near East Division, the group that oversees spying across the Middle East, according to current and former... 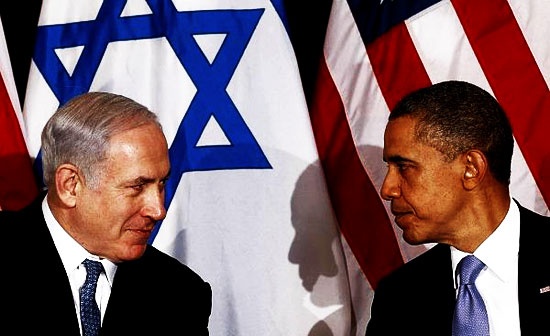 The disdain that Obama displays for Netanyahu and all things Israel is crystal-clear. American Jews, we hope you remember that on November 4th, 2012!
by Geoffrey Grider July 28, 2012
NOW THE END BEGINS SHARE:

WASHINGTON (AP) — The CIA station chief opened the locked box containing the sensitive equipment he used from his home in Tel Aviv, Israel, to communicate with CIA headquarters in Virginia, only to find that someone had tampered with it. He sent word to his superiors about the break-in.

The disdain that Obama displays for Netanyahu and all things Israel is crystal-clear. American Jews, we hope you remember that on November 4th, 2012!

The incident, described by three former senior U.S. intelligence officials, might have been dismissed as just another cloak-and-dagger incident in the world of international espionage, except that the same thing had happened to the previous station chief in Israel.

It was a not-so-subtle reminder that, even in a country friendly to the United States, the CIA was itself being watched.

In a separate episode, according to another two former U.S. officials, a CIA officer in Israel came home to find the food in the refrigerator had been rearranged. In all the cases, the U.S. government believes Israel’s security services were responsible.

Such meddling underscores what is widely known but rarely discussed outside intelligence circles: Despite inarguable ties between the U.S. and its closest ally in the Middle East and despite statements from U.S. politicians trumpeting the friendship, U.S. national security officials consider Israel to be, at times, a frustrating ally and a genuine counterintelligence threat.

In addition to what the former U.S. officials described as intrusions in homes in the past decade, Israel has been implicated in U.S. criminal espionage cases and disciplinary proceedings against CIA officers and blamed in the presumed death of an important spy in Syria for the CIA during the administration of President George W. Bush.

The CIA considers Israel its No. 1 counterintelligence threat in the agency’s Near East Division, the group that oversees spying across the Middle East, according to current and former officials. Counterintelligence is the art of protecting national secrets from spies. This means the CIA believes that U.S. national secrets are safer from other Middle Eastern governments than from Israel.

Israel employs highly sophisticated, professional spy services that rival American agencies in technical capability and recruiting human sources. Unlike Iran or Syria, for example, Israel as a steadfast U.S. ally enjoys access to the highest levels of the U.S. government in military and intelligence circles.

The officials spoke on condition of anonymity because they weren’t authorized to talk publicly about the sensitive intelligence and diplomatic issues between the two countries.

The counterintelligence worries continue even as the U.S. relationship with Israel features close cooperation on intelligence programs that reportedly included the Stuxnet computer virus that attacked computers in Iran’s main nuclear enrichment facilities. While the alliance is central to the U.S. approach in the Middle East, there is room for intense disagreement, especially in the diplomatic turmoil over Iran’s nuclear ambitions.

“It’s a complicated relationship,” said Joseph Wippl, a former senior CIA clandestine officer and head of the agency’s office of congressional affairs. “They have their interests. We have our interests. For the U.S., it’s a balancing act.”

The way Washington characterizes its relationship with Israel is also important to the way the U.S. is regarded by the rest of the world, particularly Muslim countries.

U.S. political praise has reached a crescendo ahead of Republican presidential candidate Mitt Romney’s scheduled meeting Sunday with Israeli Prime Minister Benjamin Netanyahu in Jerusalem. Their relationship spans decades, since their brief overlap in the 1970s at the Boston Consulting Group. Both worked as advisers for the firm early in their careers before Romney co-founded his own private-equity firm. Romney said in a speech this past week that Israel was “one of our fondest friends,” and he criticized Obama for what he called the administration’s “shabby treatment” of the Jewish state.

“The people of Israel deserve better than what they’ve received from the leader of the free world,” Romney said in a plain appeal to U.S. Jewish and pro-Israel evangelical voters.

Obama, who last year was overheard appearing to endorse criticism of Netanyahu from then-French President Nicolas Sarkozy, has defended his work with Israel. “We’ve gotten a lot of business done with Israel over the last three years,” Obama said this year. “I think the prime minister – and certainly the defense minister – would acknowledge that we’ve never had closer military and intelligence cooperation.”

An Israeli spokesman in Washington, Lior Weintraub, said his country has close ties with the U.S. A text message Saturday from the office of Israeli Prime Minister Benjamin Netanyahu called the report “false.”

“Israel’s intelligence and security agencies maintain close, broad and continuous cooperation with their U.S. counterparts,” Weintraub said. “They are our partners in confronting many mutual challenges. Any suggestion otherwise is baseless and contrary to the spirit and practice of the security cooperation between our two countries.”

The CIA declined comment. The tension exists on both sides.

The National Security Agency historically has kept tabs on Israel. The U.S., for instance, does not want to be caught off guard if Israel launches a surprise attack that could plunge the region into war and jeopardize oil supplies, putting American soldiers at risk.

Matthew Aid, the author of “The Secret Sentry,” about the NSA, said the U.S. started spying on Israel even before the state was created in 1948. Aid said the U.S. had a station on Cyprus dedicated to spying on Israel until 1974. Today, teams of Hebrew linguists are stationed at Fort Meade, Md., at the NSA, listening to intercepts of Israeli communications, he said.

CIA policy generally forbids its officers in Tel Aviv from recruiting Israeli government sources, officials said. To do so would require approval from senior CIA leaders, two former senior officials said. During the Bush administration, the approval had to come from the White House.

Israel is not America’s closest ally, at least when it comes to whom Washington trusts with the most sensitive national security information. That distinction belongs to a group of nations known informally as the “Five Eyes.” Under that umbrella, the United States, Britain, Australia, Canada and New Zealand agree to share intelligence and not to spy on one another. Often, U.S. intelligence officers work directly alongside counterparts from these countries to handle highly classified information not shared with anyone else.

Israel is part of a second-tier relationship known by another informal name, “Friends on Friends.” It comes from the phrase “Friends don’t spy on friends,” and the arrangement dates back decades. But Israel’s foreign intelligence service, the Mossad, and its FBI equivalent, the Shin Bet, both considered among the best in the world, have been suspected of recruiting U.S. officials and trying to steal American secrets.

Around 2004 or 2005, the CIA fired two female officers for having unreported contact with Israelis. One of the women acknowledged during a polygraph exam that she had been in a relationship with an Israeli who worked in the Foreign Ministry, a former U.S. official said. The CIA learned the Israeli introduced the woman to his “uncle.” That person worked for Shin Bet.

Jonathan Pollard, who worked for the Navy as a civilian intelligence analyst, was convicted of spying for Israel in 1987 when the Friends on Friends agreement was in effect. He was sentenced to life in prison. The Israelis for years have tried to win his release. In January 2011, Netanyahu asked Obama to free Pollard and acknowledged that Israel’s actions in the case were “wrong and wholly unacceptable.”

Ronald Olive, a former senior supervisor with the Naval Criminal Investigative Service who investigated Pollard, said that after the arrest, the U.S. formed a task force to determine what government records Pollard had taken. Olive said Israel turned over so few that it represented “a speck in the sand.”

In the wake of Pollard, the Israelis promised not to operate intelligence agents on U.S. soil.

A former Army mechanical engineer, Ben-Ami Kadish, pleaded guilty in 2008 to passing classified secrets to the Israelis during the 1980s. His case officer was the same one who handled Pollard. Kadish let the Israelis photograph documents about nuclear weapons, a modified version of an F-15 fighter jet and the U.S. Patriot missile air defense system. Kadish, who was 85 years old when he was arrested, avoided prison and was ordered to pay a $50,000 fine. He told the judge that, “I thought I was helping the state of Israel without harming the United States.”

In 2006, a former Defense Department analyst was sentenced to more than 12 years in prison for giving classified information to an Israeli diplomat and two pro-Israel lobbyists.

Despite the Pollard case and others, Olive said he believes the two countries need to maintain close ties “but do we still have to be vigilant? Absolutely. The Israelis are good at what they do.”

During the Bush administration, the CIA ranked some of the world’s intelligence agencies in order of their willingness to help in the U.S.-led fight against terrorism. One former U.S. intelligence official who saw the completed list said Israel, which hadn’t been directly targeted in attacks by al-Qaida, fell below Libya, which recently had agreed to abandon its nuclear weapons program.

The espionage incidents have done little to slow the billions of dollars in money and weapons from the United States to Israel. Since Pollard’s arrest, Israel has received more than $60 billion in U.S. aid, mostly in the form of military assistance, according to the Congressional Research Service. The U.S. has supplied Israel with Patriot missiles, helped pay for an anti-missile defense program and provided sensitive radar equipment to track Iranian missile threats.

Just on Friday, Obama said he was releasing an additional $70 million in military aid, a previously announced move that appeared timed to upstage Romney’s trip, and he spoke of America’s “unshakable commitment to Israel.” The money will go to help Israel expand production of a short-range rocket defense system.

Some CIA officials still bristle over the disappearance of a Syrian scientist who during the Bush administration was the CIA’s only spy inside Syria’s military program to develop chemical and biological weapons. The scientist was providing the agency with extraordinary information about pathogens used in the program, former U.S. officials said about the previously unknown intelligence operation.

At the time, there was pressure to share information about weapons of mass destruction, and the CIA provided its intelligence to Israel. A former official with direct knowledge of the case said details about Syria’s program were published in the media. Although the CIA never formally concluded that Israel was responsible, CIA officials complained to Israel about their belief that Israelis were leaking the information to pressure Syria to abandon the program. The Syrians pieced together who had access to the sensitive information and eventually identified the scientist as a traitor.

Before he disappeared and was presumed killed, the scientist told his CIA handler that Syrian Military Intelligence was focusing on him. source – AP News