At it's worst, it shows a conspiracy theory of the highest magnitude. Many could rightly conclude that Obama's refusal to either destroy or recapture the drone would prove that... 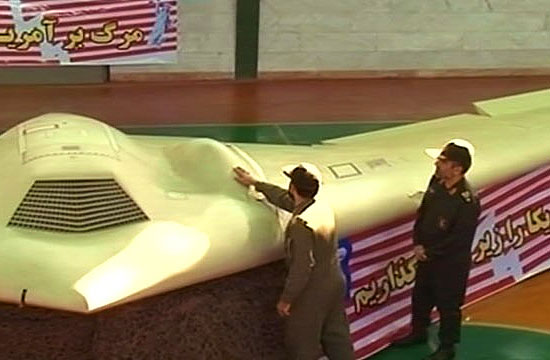 At the very least, this shows why the idea of Obama as “commander in chief” is absurd and laughable. Who ever heard of a Commander who was afraid to command troops into battle? At it’s worst, it shows a conspiracy theory of the highest magnitude. Many could rightly conclude that Obama’s refusal to either destroy or recapture the drone would prove that he purposely gave them the drone.

So what benefit would it give Iran to have the drone? First off, it would give them a complete and total window into American spy technology. By backwards engineering the drone, they could come  up with ways to disable all future drones that the US would fly over their air space.

Iran with their holiday gift from their brother B. Hussein Obama - enjoy, guys!

Secondly, it could be perceived that by allowing Iran to have the drone technology, that Obama is continuing to give Iran the time and space they need to complete developing their nuclear weaponry. But no matter what conclusion you arrive it, one thing is beyond dispute. Obama is working against the United States at a rate and with a ferocity that is difficult to wrap your head around. The ‘post-American’ president indeed.

The American president is ALSO the commander of the ARMED Forces. His refusal to at the very least send in a tomahawk missile to blow up the drone shows he is UNFIT to hold the position he ‘occupies’…

It is hard to imagine that we will survive the remaining 12 months of his term, much less another 4 years.

May  the Holy God of Israel intervene soon.