President Obama, I realize you thought you were brave and courageous when you defamed Christianity by equating the Crusades and the Inquisition with the present-day barbarism of Islam, but... 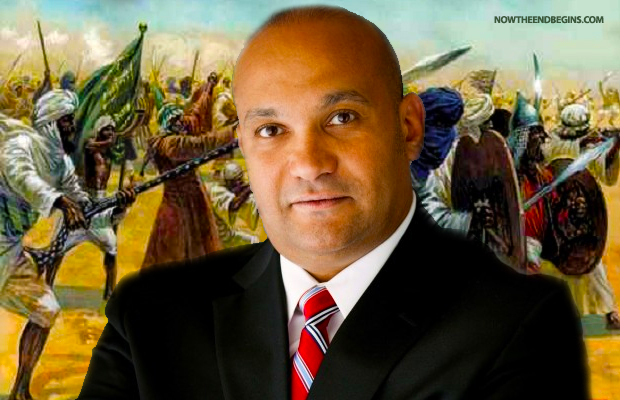 ISIS does nothing that Mohammed didn’t first do 14 centuries ago.
by Geoffrey Grider February 10, 2015
NOW THE END BEGINS SHARE:

Because of Muhammad’s example, Muslims have justifiably wiped out 270 million non-Muslims in their endeavors to establish the world Islamic government their prophet viciously commands.

Dr. Mark Christian, founder of Global Faith Institute, knows Islamic history too well, being an apostate from the Muslim faith himself. Having experienced the true nature of Islam firsthand as a devout Imam, Dr. Christian penned a fiery open letter to the American leader, that includes a blunt history lesson in the unchanging goal of ancient Islam. Here is his letter to President Obama:

President Obama… I realize you thought you were brave and courageous when you defamed Christianity by equating the Crusades and the Inquisition with the present-day barbarism of Islam, but I wonder if your “courage” goes so far as to blame Muslims for the Islamic conquests? Do you have the guts to tell them that in the name of Allah, they invaded nations, practiced ethnic and cultural cleansing, going so far as to erase the very history of conquered lands. Can you tell them that they changed languages and names, enslaved millions and killed an unknowable number of innocent souls simply because they worshiped God, and not “Allah?”. I think not. You know Christians will bow their heads and pray for you whereas Muslims will simply take your head and celebrate.

ISIS is not animated by the usual “reaction to oppression” narrative the Left trots out as an excuse for every instance of horrible behavior, whether that behavior is rioting in Ferguson, Missouri or the systematic slaughter of all those opposed to your ideology.

ISIS does nothing that Mohammed didn’t first do 14 centuries ago.

You see, the problem isn’t a “radical interpretation of Islam,” the problem is the belief in Islam that Mohammed was the “perfect man,” and as such, worthy of emulation in all things.

Until Islam can recognize that their “perfect man” wasn’t perfect, and both did and ordered horrible things to be done – certainly things that have no place in a modern world – then there will always be an ISIS. There will always be those who dedicate their lives to imitating the man who spawned the greatest killing machine in known history…Islam.

Mike Konrad, the pen name of a colleague at American Thinker, has done the math for us in a remarkably cogent piece that deserved far more attention than it received when first published in early 2014.

The President drew a moral equivalence argument at this year’s National Prayer Breakfast between the predation of Islam and the actions of Christians during the Crusades and the Inquisition. The President is not uneducated. He is surely aware of the speciousness of that argument, yet still proffered it as a back-handed justification of the profane brutality of ISIS and other Islamic supremacist groups.

When we think of genocide, the names that spring to mind are Hitler, Stalin and Pol Pot. Of course Mao and his utopian fantasies deserve a place alongside the other luminaries of human devastation; millions suffered and died because of these men.

But, when one looks a bit deeper we discover that when it comes to dealing death, the aforementioned dictators are mere peddlers compared to Islam. People forget that the Islamic conquests began 400 years before the Crusades, which were largely a response to Islamic aggression…

Read the rest of this story on Mad World News…