‘I present to you A.I. Jesus. An artificial intelligence of my invention created from the King James Bible and nothing else.’ AI Jesus has produced approximately 30,000 words in its scriptures as of August. When writing about ‘the plague,’ the AI began the passage as such, writing: ‘The Plague shall be the fathers in the world; and the same is my people, that he may be more abundant in the mouth of the LORD of hosts.’

The end times tide is rising very fast these days, as the spirit of Antichrist begins to cover the whole earth. The promised false signs, miracles and wonders of the Deceiver are starting to push against their bonds, and soon they shall break free. Deception is everywhere, and speaking of deception, allow me to introduce you to AI Jesus, the creation of engineer George Durendal. When you fully wrap your head around what you are seeing, it will terrify you. Antichrist is coming, and we who are saved are getting ready to fly.

“And he opened his mouth in blasphemy against God, to blaspheme his name, and his tabernacle, and them that dwell in heaven. And it was given unto him to make war with the saints, and to overcome them: and power was given him over all kindreds, and tongues, and nations. And all that dwell upon the earth shall worship him, whose names are not written in the book of life of the Lamb slain from the foundation of the world.” Revelation 13:6-8 (KJB)

Lucifer got into fatal trouble as recorded in the book of Isaiah, where he asserts that he will “be like the most High”, and take His Throne. We read in the book of Job where God actually allows Satan to accuse Him, and seems to treat the Devil on a near-equal peer level. But haven’t you ever thought it odd that Lucifer had no “new plan” to present? The best he could do is to want to steal what Someone else had already created.

“And then shall that Wicked be revealed, whom the Lord shall consume with the spirit of his mouth, and shall destroy with the brightness of his coming: Even him, whose coming is after the working of Satan with all power and signs and lying wonders, And with all deceivableness of unrighteousness in them that perish; because they received not the love of the truth, that they might be saved. And for this cause God shall send them strong delusion, that they should believe a lie: That they all might be damned who believed not the truth, but had pleasure in unrighteousness.” 2 Thessalonians 2:9-12 (KJB)

No one wants to see the Antichrist, that’s why he needs to come as Jesus, and pretend to be the Messiah. This is the ‘strong delusion’ of Thessalonians 2, and an unsaved world filled with lost people who rejected the gospel of the grace of God when they had the chance to receive it, will fall for it hook, line and sinker. AI Jesus is the warm-up act, real thing coming up shortly.

FROM THE DAILY MAIL UK: George Durendal used a natural-language processing system to replicate the ancient words without exactly copying the text. The technology was programmed to write about three topics: ‘the plague,’ ‘Caesar,’ and the end of days.’

The full copy of the AI’s scripture is riddled with glitches, half of the nouns used are ‘Lord,’ but some eerily resemble what is shown in the bible.

‘In these days of trials and tribulations many have turned to religion,’ Durendal shared in a blog post.

But what religion is left for those who have averted their gaze from the fables of old to the shiny metal toys of today?’

‘I present to you A.I. Jesus. An artificial intelligence of my invention created from the King James Bible and nothing else.’ 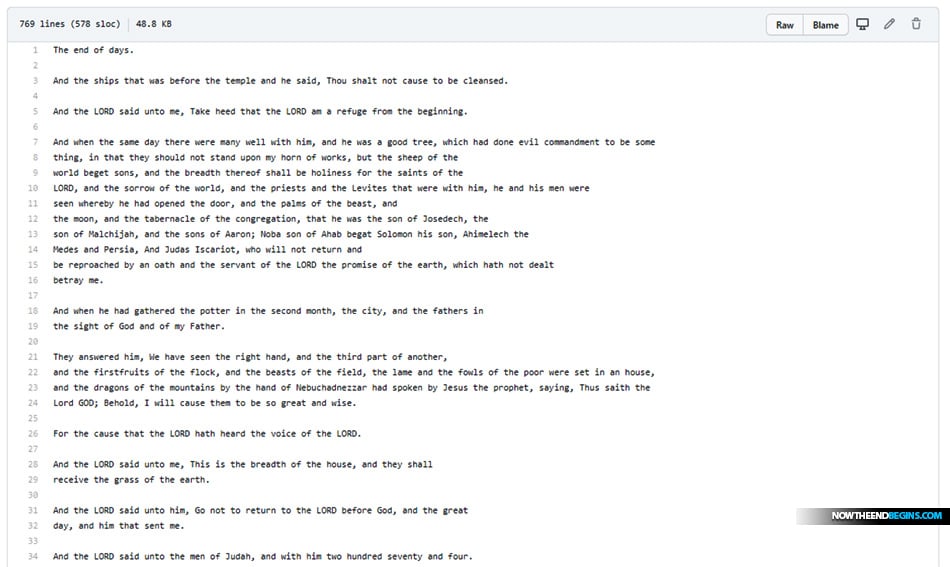 CLICK HERE TO READ ALL THE PROPHECIES FROM AI JESUS

AI Jesus has produced approximately 30,000 words in its scriptures as of August.

When writing about ‘the plague,’ the AI began the passage as such, writing: ‘The Plague shall be the fathers in the world; and the same is my people, that he may be more abundant in the mouth of the LORD of hosts.’

However, the text appears to go off track towards the end where the system begins using ‘Lord’ a number of times in a single sentence.

‘And the LORD said unto him, Sir, we know that the LORD shall swear by the LORD in the Lord, and we will not bear false witness in the Lord,’ reads the text.

The next set of writings are about ‘the end of days,’ which in the traditional bible talks about the coming of the Messiah and the world coming to an end. And the AI Jesus gave its own take on the topic.

‘And he that was dead, the servant of the LORD came unto me, saying, Son of man, speak unto you all that dwell in the wilderness and they shall be saved by the border of the LORD and his priests and his sons, and on the seven lambs, and of the seven places of the beast, and the other on the sabbath days.

But again, throughout the text a number of glitches appear such as:‘And when he was come into the house of God, which said unto the chief captain, and the gates of the brook, and the priests, and the fat that was made priest, and there was given him a wife, and his work was cast into the sea.’

The last topic given to the AI was ‘Caesar,’ who was a Roman emperor during the time of Jesus.

‘The scribes and the children of Israel were gathered together with the Levites and the men of Bethshemesh, which was the son of Josiah king of Judah, and they hanged them through the head of the body of Christ, and hath sent me,’ the AI wrote.

AI Jesus is just one of many systems programmed to write natural language. READ MORE