The bible clearly teaches that major, sobering, hard-hitting events are about to engulf the globe. Prophecy shows us that the next major event will be the Rapture of the... 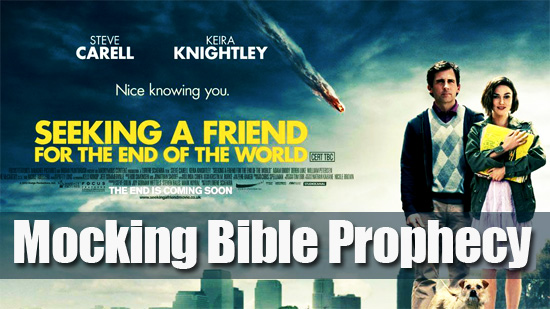 Seeking to distract you

The bible clearly teaches that major, sobering, hard-hitting events are about to engulf the globe. Prophecy shows us that the next major event will be the Rapture of the Church, followed hard by the start of the time of Jacob’s trouble, otherwise known as the Great Tribulation, leading to the appearing of the Antichrist. These are facts. Unavoidable, undeniable, inescapable facts according the Holy God of Israel.

“And for this cause God shall send them strong delusion, that they should believe a lie: That they all might be damned who believed not the truth, but had pleasure in unrighteousness.” 2 Thessalonians

Believing it or not believing what has been written in no way affects the outcome. So it is only natural, being so close to the end, that the Devil would seek to influence Hollywood to create a movie that turns the hard reality of the coming end days into a “romantic comedy” to make you think these things are not going to really happen. And how this movie smugly winds itself up with a happy ending in no way resembles the coming terror of the Wrath of the Lamb that will destroy this present world system.

And, of course, Jesus is not mentioned at all in this movie except to mock Him and those who have believed on Him…

Review from Fox News: What would you do if there were only three weeks left in the world? Would you lose all your inhibitions? Rob a bank? Seek out your soul mate? Eat every bag of Skittles left in town?

In the unconventional and very funny “Seeking a Friend for the End of the World,” charismatic Steve Carell and Keira Knightley find an enchanting calm before the final storm.

This isn’t your typical apocalypse movie. There are no killer robots or zombies. The bleakness of Cormac McCarthy’s “The Road” is gone, replaced by the hopefulness and vitality of Carell and Knightley’s charming relationship. “Seeking a Friend for the End of the World” is more a budding flower among the hordes of bleak and explosive sci-fi apocalyptic movies of late. Writer Lorene Scafaria’s (“Nick and Norah’s Infinite Playlist”) directorial debut is a bold and clever romantic comedy. It’s an apocalypse movie, a road trip movie and a romantic comedy all in one.
source – Fox News

Tags
Seeking a Friend for the End of the WorldSteve Carell