Do Encrypted Images In New US Currency Show Plans For Nuclear Strike On America?

Some pretty startling images have been discovered by Jonathan Kleck, in his work of analyzing what he calls the “encrypted messages and prophesies” hidden within our U.S. currency.... 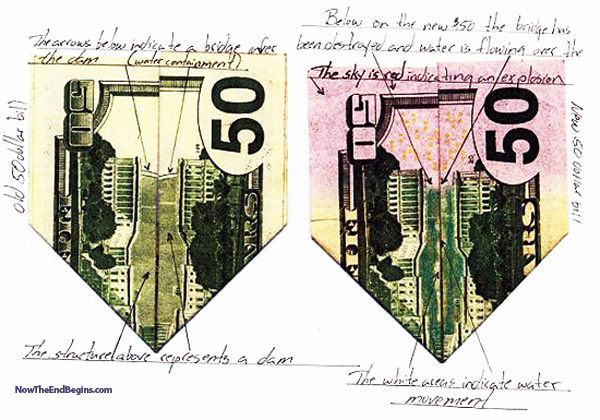 Does our new currency reveal Obama’s plans for America?

We invite you to watch this video and decide for yourself, at the very least it’s really interesting. One thing we know for sure, the New World Order loves to leave clues in things well in advance of when the events happen. As far as prophecy goes, we only put any faith and value into God’s preserved word as found in pages of the King James 1611 Authorized Version Holy Bible, and not in any private prophecies that people come up with. That being said, enjoy the video!

Free Patriot: Some pretty startling images have been discovered by Jonathan Kleck, in his work of analyzing what he calls the “encrypted messages and prophesies” hidden within our U.S. currency.

He describes his interpretation of their meaning, along with computer generated visual aids. It’s pretty powerful stuff. He sees the money as the medium for the “dark forces” to use in pronouncing their agenda and version of our future.

He’s amazingly accurate in discovery of a representation of the 911 attack, and he is certain that a nuclear missile strike is looming in America’s near future. source – Free Patriot