Muslim Brotherhood spokesperson Mahmoud Ghezlan told the London-based Asharq Al-Awsat newspaper on Wednesday that the militant group will neither speak nor meet with Israeli officials. ... 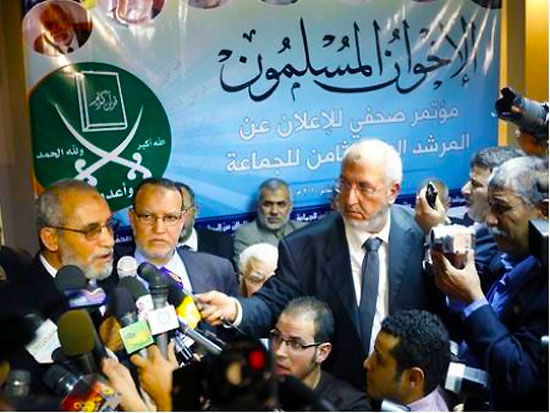 The Islamists will push for ending the 1979 peace treaty between Egypt and Israel.
by Geoffrey Grider January 26, 2012
NOW THE END BEGINS SHARE:

Muslim Brotherhood spokesperson Mahmoud Ghezlan told the London-based Asharq Al-Awsat newspaper on Wednesday that the militant group will neither speak nor meet with Israeli officials.

Some fear that Islamists will push for ending the 1979 peace treaty between Egypt and Israel.

He added that the Brotherhood’s stance on Israel is unwavering and not up for discussion. “It’s illogical to have dialogue, any dialogue, in light of the Israeli practices against the Arab peoples,” the paper quoted Ghezlan as saying.

Meanwhile, in the spirit of cooperation, Israeli Foreign Ministry spokesperson Yigal Palmor told Israeli radio that Israel has not ruled out talks. “We will be happy to hold dialogues with whoever wants to have dialogue with us,” Palmor said.

Egypt Independent adds: The Muslim Brotherhood’s Freedom and Justice Party controls 47 percent of the seats in the newly formed People’s Assembly, but the ruling Supreme Council of the Armed Forces is still running the executive branch of Egypt’s government.

Some fear that Islamists will push for ending the 1979 peace treaty between Egypt and Israel.

Western officials met with several Muslim Brotherhood and Islamist leaders after People’s Assembly elections. Ghezlan said the Brotherhood has not yet received a similar invitation from the Israeli Embassy in Cairo, but that any such request would be rejected. source – The Blaze