Egypt’s Islamists Call For The Great Pyramids To Be Destroyed

Destroy the pyramids! According to several reports in the Arabic media, prominent Muslim clerics have begun to call for the demolition of Egypt’s Great Pyramids.... 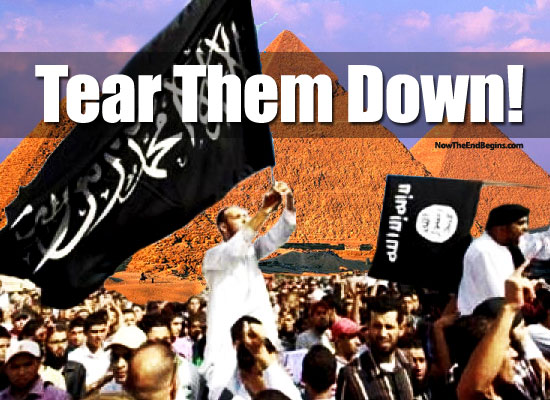 According to several reports in the Arabic media, prominent Muslim clerics have begun to call for the demolition of Egypt’s Great Pyramids—or, in the words of Saudi Sheikh Ali bin Said al-Rabi‘i, those “symbols of paganism,” which Egypt’s Salafi party has long planned to cover with wax. Most recently, Bahrain’s “Sheikh of Sunni Sheikhs” and President of National Unity, Abd al-Latif al-Mahmoud, called on Egypt’s new president, Muhammad Morsi, to “destroy the Pyramids and accomplish what the Sahabi Amr bin al-As could not.”

Will the blood-thirsty Islamists that have captured Egypt destroy the pyramids?

This is a reference to the Muslim Prophet Muhammad’s companion, Amr bin al-As and his Arabian tribesmen, who invaded and conquered Egypt circa 641.  Under al-As and subsequent Muslim rule, many Egyptian antiquities were destroyed as relics of infidelity.  While most Western academics argue otherwise, according to early Muslim writers, the great Library of Alexandria itself—deemed a repository of pagan knowledge contradicting the Koran—was destroyed under bin al-As’s reign and in compliance with Caliph Omar’s command.

However, while book-burning was an easy activity in the 7th century, destroying the mountain-like pyramids and their guardian Sphinx was not—even if Egypt’s Medieval Mamluk rulers “de-nosed” the latter during target practice (though popular legend still attributes it to a Westerner, Napoleon).

Now, however, as Bahrain’s “Sheikh of Sheikhs” observes, and thanks to modern technology, the pyramids can be destroyed.  The only question left is whether the Muslim Brotherhood president of Egypt is “pious” enough—if he is willing to complete the Islamization process that started under the hands of Egypt’s first Islamic conqueror.

Nor is such a course of action implausible.  History is laden with examples of Muslims destroying their own pre-Islamic heritage—starting with Islam’s prophet Muhammad himself, who destroyed Arabia’s Ka‘ba temple, transforming it into a mosque.

Asking “What is it about Islam that so often turns its adherents against their own patrimony?” Daniel Pipes provides several examples, from Medieval Muslims in India destroying their forefathers’ temples, to contemporary Muslims destroying their non-Islamic heritage in Egypt, Iraq, Israel, Malaysia, and Tunisia. source – Front Page Mag