Hundreds of Muslim extremists surrounded a church in central Egypt and threatened to kill the local priest, the Assyrian International News Agency reported. The extremists began targeting the church... 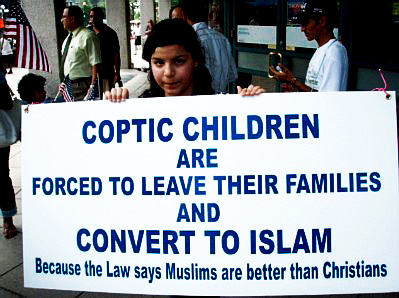 Rise of thug rule in Egypt

Minya, 24 June (AKI) – Hundreds of Muslim extremists surrounded a church in central Egypt and threatened to kill the local priest, the Assyrian International News Agency reported. The extremists began targeting the church in a village 7 kilometres south of the city of Minya in March after renovation work began, threatening to demolish the church.

AINA Friday cited eyewitnesses as saying that the Muslim mob, dressed in white robes and long beards, chanted: “We will kill the priest, we will kill him and no one will prevent us.” One of their leaders was cited as saying they would “…cut him to pieces,” AINA reported. The priest Father George Thabet, who was holding morning mass and was locked in the church with several parishioners. Security forces arrived five hours later and escorted the priest away in a police car to the Coptic Diocese in Minya.

Coptic youths who were attending mass remained inside St George’s church to defend it from Muslim attacks. No police or security of any kind was present during the standoff, according to reports. The archdiocese of Minya issued a statement deploring the incident and the “return of the Salafists to besiege St. George’s church again, some carrying weapons, threatening to kill the priest unless he leaves the village.”

The statement called on government officials and security authorities uphold rule of law and maintaining security in the country. On 23 March, hardline Muslims had surrounded the 100-year old church, which was granted a renovation licence, and ordered the church officials to stop construction immediately and undo what they had completed, threatening to demolish the church if their demands were not met.

The extremists also ordered church authorities removed Thabet from Beni Ahmad village and gave him and his family a time limit of 35 days, later extended to 50 days, to leave. The Muslims accused him of making extensions to the church and of causing sectarian strife. The Coptic Christians account for about 10 percent of Egypt’s population and have been repeatedly targeted by Muslim extremists. source – ADN Kronos