Obama and the Muslim Brotherhood; Now In America

An Egyptian magazine claims that six American Islamist activists who work with the Obama administration are Muslim Brotherhood operatives who enjoy strong influence over U.S. policy.

The Dec. 22 story published in Egypt’s Rose El-Youssef magazine (read an IPT translation here) suggests the six turned the White House “from a position hostile to Islamic groups and organizations in the world to the largest and most important supporter of the Muslim Brotherhood.”

The story is largely unsourced, but its publication is considered significant in raising the issue to Egyptian readers. 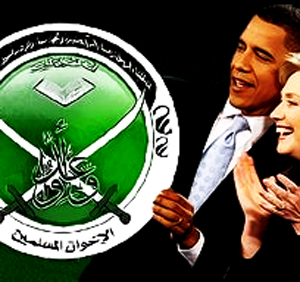 This is all finally coming to light…but its too late. The damage has already been done.

Alikhan is a founder of the World Islamic Organization, which the magazine identifies as a Brotherhood “subsidiary.” It suggests that Alikhan was responsible for the “file of Islamic states” in the White House and that he provides the direct link between the Obama administration and the Arab Spring revolutions of 2011.

Elibiary, who has endorsed the ideas of radical Muslim Brotherhood luminary Sayyid Qutb, may have leaked secret materials contained in Department of Homeland Security databases, according to the magazine. He, however, denies having any connection with the Brotherhood.

Elibiary also played a role in defining the Obama administration’s counterterrorism strategy, and the magazine asserts that Elibiary wrote the speech Obama gave when he told former Egyptian President Hosni Mubarak to leave power but offers no source or evidence for the claim.

According to Rose El-Youssef, Rashad Hussain maintained close ties with people and groups that it says comprise the Muslim Brotherhood network in America. This includes his participation in the June 2002 annual conference of the American Muslim Council, formerly headed by convicted terrorist financier Abdurahman Alamoudi.

He also participated in the organizing committee of the Critical Islamic Reflection along with important figures of the American Muslim Brotherhood such as Jamal Barzinji,Hisham al-Talib and Yaqub Mirza.

Regarding al-Marayati, who has been among the most influential Muslim American leaders in recent years, the magazine draws connections between MPAC in the international Muslim Brotherhood infrastructure.

Magid heads ISNA, which was founded by Brotherhood members, was appointed by Obama in 2011 as an adviser to the Department of Homeland Security. The magazine says that has also given speeches and conferences on American Middle East policy at the State Department and offered advice to the FBI.

Rose El-Youssef says Patel maintains a close relationship with Hani Ramadan, the grandson of Brotherhood founder Hasan al-Banna, and is a member of the Muslim Students Association, which it identifies as “a large Brotherhood organization.” source – IPT