You ain’t seen nothing yet (with apologies to Al Jolson) Not only are they not going away, they have regrouped to become larger, louder and stronger. A clash between... 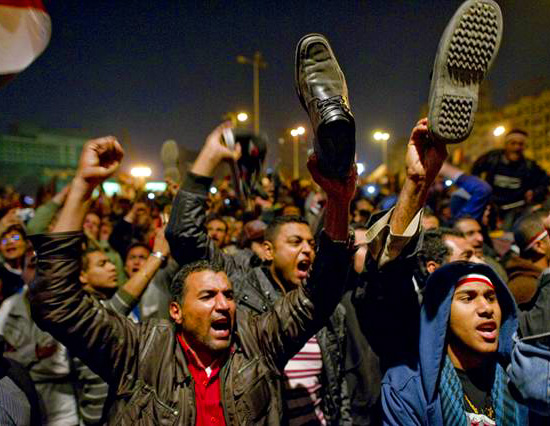 You ain’t seen nothing yet (with apologies to Al Jolson)

Not only are they not going away, they have regrouped to become larger, louder and stronger. A clash between the million plus protesters and the Egyptian military is virtually certain at this point.

“This will push the country to the edge of the abyss. Tomorrow, the army will intervene, if it does not, there will be chaos,” said one activist, Waleed el-Korumi. “We will lay waste to our country if we march on the palace. It’s a case of both sides sticking to its guns and at the end we will lose our nation,” he said, though he added that marches would remain peaceful.

Pedro Ugarte / AFP - Getty Images Anti-government demonstrators wave their shoes as they show their anger during a speech by Egyptian President Hosni Mubarak.

CAIRO — Egypt’s people-power protesters, reeling with disillusion and anger after President Hosni Mubarak disappointed their hopes he was about to resign, planned massive new demonstrations on Friday that may test the army’s loyalties. The increasingly sour confrontation after 17 days of unrest has raised fears of violence in the most populous Arab nation, a key U.S. ally in an oil-rich region where the chance of disorder spreading to other repressive states has troubled world markets. Hours after Mubarak’s speech Thursday night, hundreds of protesters converged on Egypt’s presidential palace, where security is thick, Sharif Kouddous of Democracy Now said from Cairo on MSNBC. It was not known if Mubarak was there.