The rulings effectively erase the tenuous progress from the past year's troubled transition, leaving Egypt with no parliament and concentrating rule even more firmly in the hands of the... 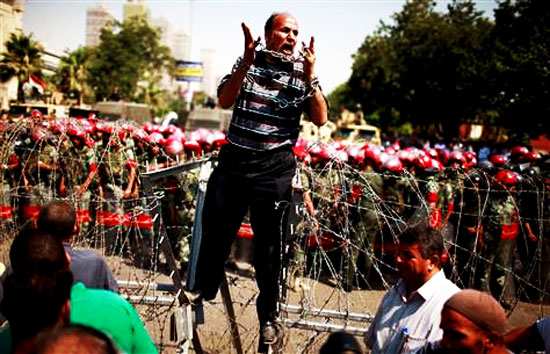 A protester shouts as he stands on top of a barricade in front of soldiers outside the Supreme Constitutional Court in Cairo
by Geoffrey Grider June 14, 2012
NOW THE END BEGINS SHARE:

CAIRO –  Judges appointed by Hosni Mubarak dissolved the Islamist-dominated parliament Thursday and ruled that Mubarak’s former prime minister can stand in the presidential runoff this weekend — setting the stage for the military and remnants of the old regime to stay in power.

The rulings effectively erase the tenuous progress from the past year’s troubled transition, leaving Egypt with no parliament and concentrating rule even more firmly in the hands of the military generals who took power after Mubarak’s ouster.

The fundamentalist Muslim Brotherhood, which stands to lose the most from the rulings, called the moves a coup and vowed to rally the street against the ruling military and former prime minister Ahmed Shafiq, the presidential candidate seen by critics as a favorite of the generals and a symbol of Mubarak’s autocratic rule.

As night fell, a crowd of protesters was rapidly growing in Cairo’s Tahrir Square, birthplace of the uprising that toppled Mubarak last year.

Senior Brotherhood leader and lawmaker Mohammed el-Beltagy said the rulings amounted to a “full-fledged coup.” “This is the Egypt that Shafiq and the military council want and which I will not accept no matter how dear the price is,” he wrote on his Facebook page.

The decisions were a heavy blow to the Brotherhood. In the parliamentary elections

late last year — Egypt’s first democratic ones in generations — the Brotherhood vaulted to become the biggest party in the legislature, with half the seats, alongside more conservative Islamists who took another 20 percent. It is hoping to win the presidency as well with its candidate, Mohammed Morsi, in this weekend’s presidential run-off against Shafiq. The rulings now take away their power base in parliament and boost Shafiq.

“The military placed all powers in its hands. The entire process has been undermined beyond repair,” Bahgat said. “They now have the legislative and the executive powers in their hands and there is a big likelihood that the military-backed candidate (Shafiq) is going to win. It is a soft military coup that unfortunately many people will support out of fear of an Islamist takeover of the state.”

A day earlier, the military-appointed government gave the military police and intelligence the right to arrest civilians for a range of vague crimes such as disrupting traffic and the economy that would give it a mandate to crack down on protests. Many saw the move as evidence the generals are aiming to hold on to power beyond the July 1 deadline they announced for handing it over to a civilian president.

Throughout the day Thursday, military armored vehicles circulated through the streets of Cairo, playing patriotic songs, as soldiers passed out leaflets urging passers-by to vote in the presidential run-off Saturday and Sunday. The rulings also mean that the next president of Egypt will be sworn before the generals who took over from Mubarak 16 months ago rather than parliament. source – MSNBC