A collective hush fell on the crowd of nearly 100 people as the drone slowly but methodically circled overhead. Disbelief was the expression on most of the faces of... 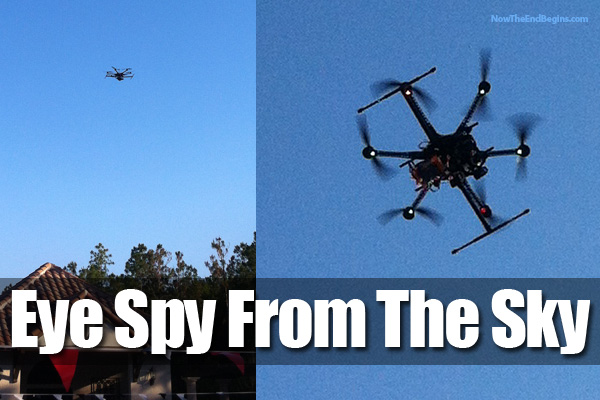 I took these photos myself on my iPhone. The drone hovered overhead for nearly five minutes.
by Geoffrey Grider May 18, 2013
NOW THE END BEGINS SHARE:

This is conspiracy, but not a theory. I saw it with my own eyes. It happened tonight at a children’s swim meet in Northeast Florida. I was watching my children participate in the season-opener swim meet, and it was nearly over, just one more race to go. When, without warning, a drone appeared seemingly from nowhere, and began to circle slowly overhead.

I took these photos tonight on my iPhone as the drone hovered overhead for nearly five minutes.

A collective hush fell on the crowd of nearly 100 people as the drone slowly but methodically circled overhead. Disbelief was the expression on most of the faces of the people who saw it. As I stood there, snapping pictures and video, my mind began to race and recall some of the drone stories we have done in the last year.

Drones are the calling card of the Obama regime

I remembered New York City mayor Michael Bloomberg telling us that “it’s now Big Brother, and you better get used to it.” I remembered the story we did on how President Obama has now authorized drones to monitor people’s cell phone usage from the sky. Even the story about the Maple Seed Drones developed by US Governmental supplier Lockheed Martin.

Friends, the promise of Barack Hussein Obama to ‘fundamentally change America’ has come true. The America we love and used to know is gone, and it’s never coming back. George Orwell said that the “Big Brother” society he warned us about would take place in 1984. He was only off by 29 years.

Obama was caught up this week in the terrifying IRS targeting of conservatives and Tea Party-based groups who like to pray to God and read the Constitution. Drones are monitoring children’s swim meets, and soon will be an accepted fact of every day life. Obama is on record as of yesterday saying that he ‘offers no apologies’ for any of the scandals he and his administration are currently involved in. And he means it. He is not sorry one single bit, and given the chance, he will enslave America in exactly the same way as Hitler did to Germany in 1932.

Obama is busy now creating his private civilian army that will rival the United States military, as he promised to do in 2008. But he won’t be the ‘commander-in-chief’ of this army.

He will be the dictator.