Driverless Cars Now Legal In Three States Thanks To Google 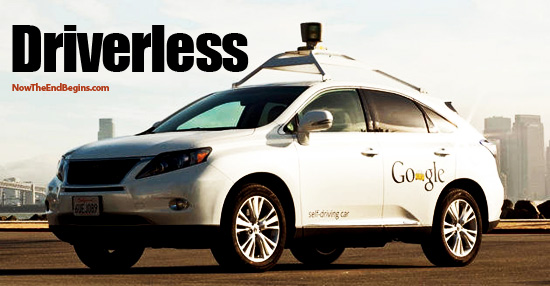 As we get closer and closer to the Mark of the Beast and the One World Government, you will see more and more technology that needs little or no human interaction to function.
by Geoffrey Grider September 26, 2012
NOW THE END BEGINS SHARE:

California has become the third state to welcome driverless cars with open arms. Governor Jerry Brown signed a bill into law today that officially legalized self-driving vehicles, following in the footsteps of Nevada and Florida.

As we get closer and closer to the Mark of the Beast and the One World Government, you will see more and more technology that needs little or no human interaction to function.

The signing event was held at the Google complex in Mountain View, Calif. where engineers have been working on driverless car concepts for years and employees routinely use them to commute to and from work.

Such vehicles weren’t technically illegal to operate before passage of the bill, but Google and others working on similar technology hope that by making their use explicitly legal it will clear up any confusion on the part of law enforcement and limit the chance they might be disallowed in the future. California’s bill reportedly contains fewer restrictions on the cars’ use than other states, such as Nevada where each vehicle must log a certain amount of testing hours before hitting the open road, but the door is open for potential regulations to be amended at a later date.

Google believes that smart cars will prove to be much safer than those with human drivers, in part because they won’t need to worry about distractions and typical reaction times. That belief was given some validity this summer when the search giant revealed that its driverless cars had completed 300,000 miles of testing without a single incident. source – Yahoo News