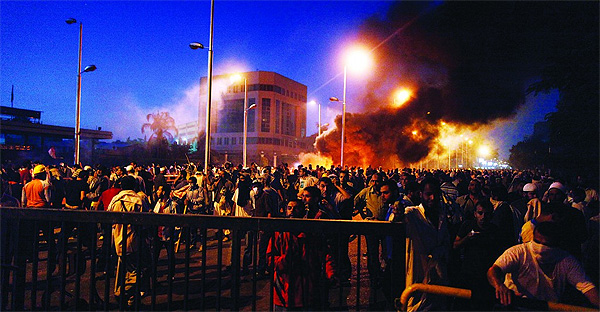 At least 95 people were killed and 874 injured, the country’s health ministry said, as unrest spread to other parts of the country.
by Geoffrey Grider August 14, 2013
NOW THE END BEGINS SHARE:

At least 95 people were killed and 874 injured, the country’s health ministry said, as unrest spread to other parts of the country.

A month-long nationwide state of emergency was declared as the interim government tried to maintain order.

Witness reports and pro-Morsi volunteers at the camp put the toll much higher, but the none of the higher figures could be immediately confirmed by NBC News.

Among the dead were Asmaa Beltagy – the 17-year-old daughter of Mohammed Beltagy, one of the Muslim Brotherhood’s top leaders – and two foreign media journalists.

Outside Cairo, two churches were attacked and set on fire in Dermous, while an air force colonel and a military conscript were killed in an attack on a highway, security sources said.

Turkey’s prime minister called on the United Nations Security Council to help, describing the events as a “massacre.”

“The international community, especially the U.N. Security Council and Arab League, must act immediately to stop this massacre,” Tayyip Erdogan’s office said in a statement.