Obama’s links to hardcore anti-American people and groups is so pervasive that had he applied to work at the White House prior to becoming president, he would NOT have... 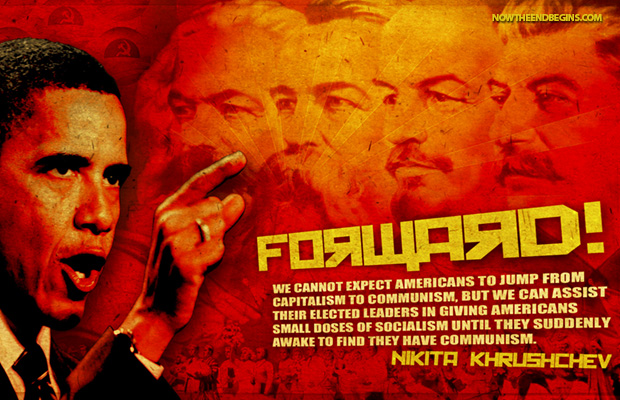 In 2004, the Democratic Party introduced their hopeful candidate for a future presidential election – Barack Hussein Obama.

EDITOR’S NOTE: It has been said by many that Barack Hussein Obama “came out of nowhere” to become president of the United States. No, that is not true. As this article will clearly show, the hand-picked, young Barry Soetoro was carefully designed. groomed and crafted by New World Order puppet-masters to become the virulently Anti-American wrecking ball that is Barack Obama. The roots of this deception and betrayal go all the way back to 1979.

It was quite an amazing speech that night. It was obvious that this man was a masterful orator; unfortunately, it was not obvious that the one commanding the attention of the DNC and millions of viewers across the nation, was a radical Marxist Socialist.

During his campaign in 2008, associations and events from Obama’s life began to surface. Since I had heard BHO speak during the DNC in 2004, red flags were waving everywhere — I had to find out who this man really was. I began to dig.

The New World Order conceived the idea of a Barack Hussein Obama in a Liberal Think Tank, to be used as an anti-American Pac-Man to be set loose inside the White House and gobbling up everything is sight. They have been astonishingly successful.

I saw that he was a friend of unrepentant homegrown terrorist, Bill Ayers. Ayers called himself a small “c” Communist, and was the head of Weather Underground in the 1960’s. Ayers was convicted of bombing federal buildings, and today is a professor and writer, indoctrinating impressionable students to become future Marxist/Socialist/Communists.

We saw Obama’s long time friend and pastor, the Reverend Jeremiah Wright, who instead of preaching about Jesus and His call to “Love thine enemy” was heard to say “God damn America!” Wright is a well known Black Liberation theologian. Obama sat under his America-hating vitriol for twenty years, but claims that the reverend never spoke this way to him personally.

“Obama’s links to hardcore anti-American people and groups is so pervasive that had he applied to work at the White House prior to becoming president, he would NOT have received a security clearance. The media knew much of this info but made a concerted effort to avoid stories about Obama’s background. During the 2008 presidential campaign, this author even sent evidence of Obama’s 1996 “New Party” (a socialist party) membership to a half dozen prominent reporters and received no response.”

I had read about the possibility that Obama had been closely linked to the Chicago Democratic Socialist Party. I went to that website and began to search. I found out that Obama had been propped up by this organization in his bid for State Senator. I found out that he had been honored at various dinners at the CDSP. I even began a conversation via email with then head of that organization, Bob Roman. I told him that I was interested in the party and wanted to find out more. He was friendly, and happy that I showed an interest. Then one day, I came right out and asked him if Obama was a member of their party. Mr. Roman abruptly ended any correspondence with me.

Once Obama was elected and inaugurated, he began filling his administration with Socialists and Communists. He even made up new positions; remember the Czars? If you look up a profile on any of them, you will find that they were unashamedly Communist. Obama even relieved some of the appointees, realizing that their backgrounds were too radical, even for him.

“Lets pretend for a second that a Republican presidential nominee was raised by a KKK leader, attended KKK events, joined a KKK-backed political party, and appointed KKK activists to key positions in his campaign. Would the media have reported that? Of course! Indeed, it would have caused such a firestorm that the nominee would have been forced from the race. Even though socialism /communism has caused at least 60 million deaths worldwide, our media has decided that it is more acceptable than racism. This is because many reporters are leftists who still believe in the socialist utopia dream. It should be clear by now that our media is treacherous and cannot be trusted to do what’s best for the country.” [1] – source

Did you know that as early as 2006, the GOP leadership knew of all of Obama’s Socialist/Communist associations, but decided not to make an issue of it during the campaign? Now why on earth would they do that?

Finding out about Obama’s socialist background is not difficult and is quite easy to dig up. But one thing is clear: Obama is a true-blue believer in socialism, and the evidence for this is simply overwhelming.

Listen as Percy Sutton freely admits that Barack Obama’s campaign for president was started by Muslim Khalid al-Mansour and, though he doesn’t mention his name, he lists “one of the world’s richest men”, who we know to be George Soros, as the money behind it all:

“A man named, Robert Taylor, was Jarrett’s maternal grandfather and her political background could be established with him, but in the 1940’s Communism was frowned upon and Mr. Taylor was involved in such Communist fronts as the American Peace Mobilization and the Chicago Civil Liberties Committee. Now another person whom, was also a member of these groups and was a “mentor” for Barack Obama was the Communist journalist, none other than Frank Marshall Davis. Now here we can show a direct link to Communist influences to both Barack Obama and Valerie Jarrett both of who had very close associations with Communist Party members.

It was Jarrett’s mother Barbara Taylor Bowman who co-founded the Chicago-based graduate school in child development known as the Erikson Institute, which was named after Erik Erikson a notable psychoanalyst. In 1950 Erikson became a hero to the left by choosing to resign from his professorship at the University of California rather than sign an anti-communist loyalty oath as the school required. Indicative of the Erikson Institute’s radical political orientation is the fact that its board of trustees has included, in addition to Bowman, such figures as Tom Ayers (father of the former Weather Underground terrorist and lifelong Marxist Bill Ayers) and Bernardine Dohrn (longtime wife of Bill Ayers). Bill Ayers, for his part, called Bowman “a neighbor and friend” in his 1997 book A Kind and Just Parent, noting that his neighbors also included Louis Farrakhan and “writer Barack Obama.” [2] – source

If the evidence offered in this article is not compelling enough to convince you that we are governed by a Marxist/Socialist/Communist, then you, my friend, are brainwashed.

God please have mercy on America, if it is not too late.