Does The ‘Birmingham Fragment’ Prove That Muhammed Did Not Write The Qu’ran?

Fragments of the world's oldest Qu'ran, found in Birmingham last month, may predate the Prophet Muhammad and could even rewrite the early history of Islam, according to scholars. ... 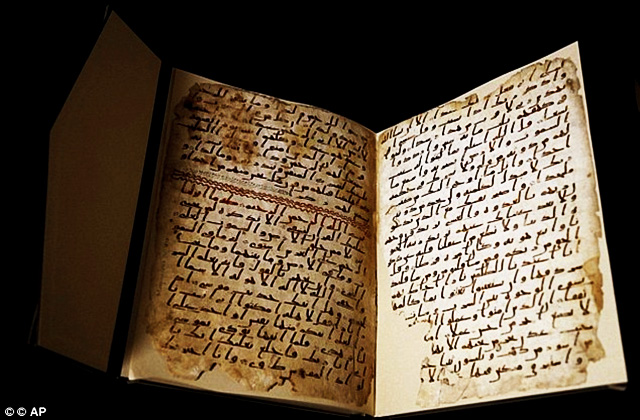 “I marvel that ye are so soon removed from him that called you into the grace of Christ unto another gospel: Which is not another; but there be some that trouble you, and would pervert the gospel of Christ. But though we, or an angel from heaven, preach any other gospel unto you than that which we have preached unto you, let him be accursed.” Galatians 1:6-8 (KJV)

EDITOR’S NOTE: When Muhammed wasn’t busy borrowing characters from the Bible like the Angel Gabriel, it turns out that he also may have been borrowing the entire Qu’ran itself from another author who lived around the same time he did. If this recent discovery turns out to  be true, it will expose the entire early history of Islam as completely fabricated from the way Muhammed said it happened. Turns out that maybe Muhammed and Mormon founder Joseph Smith have more in common than we had suspected with their shared love of magical visits from imaginary angels.

Muslim tradition teaches that the Prophet Muhammed received the “Holy Qu’ran” directly from the Angel Gabriel, memorized it and passed it on orally to his followers. But carbon dating on the world’s oldest Qu’ran may just prove that the Qu’ran was already written and published by someone else who lived right around the same time as Muhammed did. Is the entire religion of Islam actually based on a plagiarized document?

Fragments of what is believed to be the world’s oldest Koran. Several historians have said it could even predate the Prophet Muhammad. Professor Nadir Dinshaw, who studies interreligious relations at the University of Birmingham, described the discovery as ‘startling’.

Fragments of the world’s oldest Koran, found in Birmingham last month, may predate the Prophet Muhammad and could even rewrite the early history of Islam, according to scholars. The pages, thought to be between 1,448 and 1,371 years old, were discovered bound within the pages of another Koran from the late seventh century at the library of the University of Birmingham.

Written in ink in an early form of Arabic script on parchment made from animal skin, the pages contain parts of the Suras, or chapters, 18 to 20, which may have been written by someone who actually knew the Prophet Muhammad – founder of the Islamic faith.

Historian Tom Holland, told the Times: ‘It destabilises, to put it mildly, the idea that we can know anything with certainty about how the Koran emerged – and that in turn has implications for the history of Muhammad and the Companions.’

Keith Small, from the University of Oxford’s Bodleian Library, added: ‘This gives more ground to what have been peripheral views of the Koran’s genesis, like that Muhammad and his early followers used a text that was already in existence and shaped it to fit their own political and theological agenda, rather than Muhammad receiving a revelation from heaven. source