The Pentagon is rushing to send a large floating base for commando teams to the Middle East as tensions rise with Iran, al-Qaeda in Yemen and Somali pirates, among... 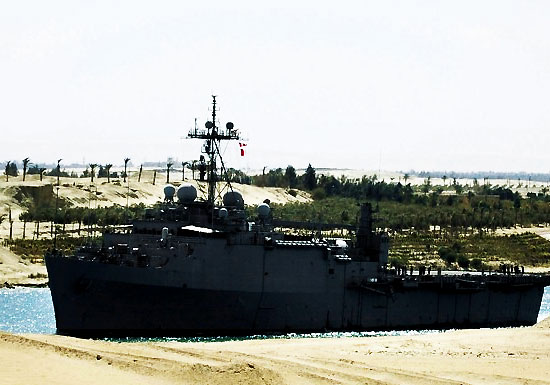 Military Sealift Command (MSC) requests information about the cost and availability of providing one (1) U.S. or Foreign Flagged vessel to support maritime forces. The vessel will serve as an Afloat Forward Staging Base, providing maritime mobility, support, and refueling of small boats and rotary-wing aircraft.
by Geoffrey Grider January 27, 2012
NOW THE END BEGINS SHARE:

Building the AFLOAT FORWARD STAGING BASE

The Pentagon is rushing to send a large floating base for commando teams to the Middle East as tensions rise with Iran, al-Qaeda in Yemen and Somali pirates, among other threats.

Military Sealift Command (MSC) requests information about the cost and availability of providing one (1) U.S. or Foreign Flagged vessel to support maritime forces. The vessel will serve as an Afloat Forward Staging Base, providing maritime mobility, support, and refueling of small boats and rotary-wing aircraft.

In response to requests from the U.S. Central Command, which oversees military operations in the Middle East, the Navy is converting an aging warship it had planned to decommission into a makeshift staging base for the commandos. Unofficially dubbed a “mothership,” the floating base could accommodate smaller high-speed boats and helicopters commonly used by Navy SEALs, procurement documents show.

Special Operations Forces are a key part of the Obama administration’s strategy to make the military leaner and more agile as the Pentagon confronts at least $487 billion in spending cuts over the next decade.

Lt. Cmdr. Mike Kafka, a spokesman for the Navy’s Fleet Forces Command, declined to elaborate on the floating base’s purpose or to say where, exactly, it will be deployed in the Middle East. Other Navy officials acknowledged that they were moving with unusual haste to complete the conversion and send the mothership to the region by early summer.

Navy documents indicate that it could be headed to the Persian Gulf, where Iran has threatened to block the Strait of Hormuz, a crucial shipping route for much of the world’s oil supply. A market survey proposal from the Military Sealift Command, dated Dec. 22 and posted online, states that the floating base needed to be delivered to the Persian Gulf.

Other contract documents do not specify a location but say the mothership would be used to “support mine countermeasure” missions. Defense officials have said that if Iran did attempt to close the Strait of Hormuz, it would rely on mines to obstruct the waterway.

With a large naval base in Bahrain, and one or two aircraft carrier groups usually assigned to the region, the Navy already has a substantial presence in the Persian Gulf and surrounding waters. Adding the mothership ship would do relatively little to bolster U.S. maritime power overall, but it could play an instrumental role in secretive commando missions offshore.

The deployment of the floating base could also mark a return to maritime missions for SEAL teams, which for the last decade have spent most of their time on land in Iraq and Afghanistan.

Other details of the project became public Tuesday when the Military Sealift Command posted a bid request to retrofit the USS Ponce, an amphibious transport docking ship, on a rush-order basis.

Until December, the Navy had planned to retire the Ponce and decommission it in March after 41 years of service. Among other missions, it was deployed to the Mediterranean Sea last year in support of NATO’s air war over Libya.

Instead, the ship will be modified into what the military terms an Afloat Forward Staging Base. Kafka, the Fleet Forces command spokesman, said it would be used to support mine-clearance ships, smaller patrol ships and aircraft.

The documents posted by the Military Sealift Command in December, however, specify that the mothership will be rebuilt so that it can also serve as a docking station for several small high-speed boats and helicopters commonly used by Navy SEAL teams. source – Washington Post