At least two networks have emails from the National Security Adviser’s office telling a counterterrorism group to stand down,” Gingrich told Fox News’ Greta Van Susteren. “They were a... 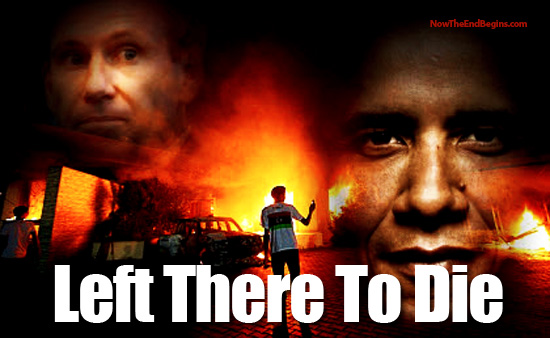 Why did the Obama White House allow 4 Americans to be slaughtered on the anniversary of 9/11?
by Geoffrey Grider October 31, 2012
NOW THE END BEGINS SHARE:

Obama is no King David, but they do have one thing in common:

“And he wrote in the letter, saying, Set ye Uriah in the forefront of the hottest battle, and retire ye from him, that he may be smitten, and die. ” 2 Samuel 11:15

From The Blaze: Former House Speaker Newt Gingrich said Tuesday a U.S. senator told him that at least two news networks have emails from the White House ordering a counterterrorism team to stand down on a rescue mission at the U.S. Consulate in Benghazi, Libya.

Why did the Obama White House allow 4 Americans to be slaughtered on the anniversary of 9/11?

“There is a rumor — I want to be clear, it’s a rumor — that at least two networks have emails from the National Security Adviser’s office telling a counterterrorism group to stand down,” Gingrich told Fox News’ Greta Van Susteren. “They were a group in real-time trying to mobilize Marines and C-130s and the fighter aircraft, and they were told explicitly by the White House ‘stand down and do nothing. This is not a terrorist action.’”

He continued, “If that’s true, and I’ve been told this by a fairly reliable U.S. senator, if that’s true and that comes out in the next day or two, I think it raises enormous questions about the president’s role, Tom Donilon, the National Security Adviser’s role, the Secretary of Defense Leon Panetta, who has taken it on his own shoulders, that he said don’t go. And I think that’s very dubious, given that the president said he had instructions they are supposed to do everything they could to secure American personnel.”

Gingrich said if accurate, it leaves two conclusions: that the the secretary of defense usurped the commander in chief or that Obama never gave the order.

“I think you are going to see this come back tomorrow and the next day,” he said.

Gingrich said he thinks Benghazi will be “enormous in terms of the election,” saying that he’s been to multiple places where voters want to know what happened. “[Benghazi] was suspended for two days by the storm coverage, which dominated everything, but I think tomorrow as the storm begins to recede, you’ll see Benghazi come back,” he said. source – The Blaze