The device, called a Magic Band, includes a radio-frequency-identification chip. Walt Disney Parks and Resorts recently got permission from the Federal Communications Commission to try out high-tech wristbands, according... 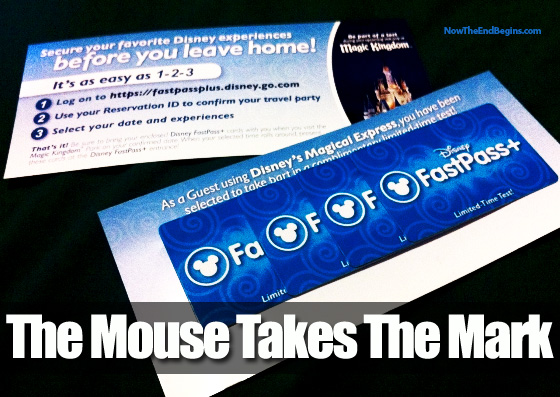 Guests who have been chosen to participate in a trial test of FastPass+ receive this package in the mail. It includes information about the system and RFID-encoded cards.
by Geoffrey Grider October 18, 2012
NOW THE END BEGINS SHARE:

RELATED STORY: The Mark of the Beast…

Brothers and sisters, day in and day out we use this cyber-pulpit to warn you of what is about to come upon the whole earth. The bible calls it the ‘time of Jacob’s trouble’, also known as the Great Tribulation. The bible tells us in the book of Revelation that an implant that will be forced on all people will control all buying, all selling, and all movement. We are watching that very system being constructed right before our eyes. We urge you to flee to Jesus, trust in Him, accept His Sacrifice as payment for your sins, and to flee the wrath which is to come before it’s too late.

“For then shall be great tribulation, such as was not since the beginning of the world to this time, no, nor ever shall be. And except those days should be shortened, there should no flesh be saved: but for the elect’s sake those days shall be shortened.” Matthew 24:21,22

Guests who have been chosen to participate in a trial test of FastPass+ receive this package in the mail. It includes information about the system and RFID-encoded cards.

Walt Disney Parks and Resorts recently got permission from the Federal Communications Commission to try out high-tech wristbands, according to Disney’s application. The device, called a Magic Band, includes a radio-frequency-identification chip.

Disney is quietly introducing technology that could drastically alter visits to its parks through a long-term initiative called the Next Generation Experience, which could cost up to $1 billion, according to published reports.

Tom Staggs, chairman of Walt Disney Parks and Resorts, outlined in February 2011 potential upgrades during an Anaheim speech, saying visitors one day could reserve ride times and check into hotels from home.

Disney has declined to elaborate

“We regularly test ways to make our guests’ experience even better than it is today,” said Marilyn Waters, a spokeswoman for Walt Disney Parks and Resorts, in a statement.

Disney was required to seek FCC permission because the wristbands use wireless technology.

Disney also recently sought three patents for wristbands that include the radio-frequency-identification, or RFID, tags that store personal information, according to documents filed with the U.S. 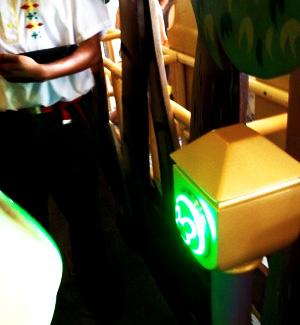 You are watching the door to YOUR freedoms shutting ever so slowly, but with great force of power and intent of movement. RFID tracking is being installed everywhere. There will soon be no hiding place…

Visitors to Walt Disney World in Florida have tested out similar technology.

For example, in a test, visitors got Fastpass cards with RFID chips that could be used at the airport to get front-of-the-line passes via a device there for rides later at the Florida parks.

Installation permits indicated that the Fastpass system could be ready as early as this fall, said R.A. Pedersen, author of The Epcot Explorer’s Encyclopedia Team, in an email.

The wristbands also could be used for annual passes or multi-day tickets. The devices eventually could solve the problem at the Disneyland Resort in Anaheim of unofficial ticket agencies selling multi-day passes by the day – a practice that violates Disney’s policy.

See a previous story about Disney’s Next Generation initiative.