Black Friday casts a pall over our nation, a dark and sinister chill that manifests itself in how we treat each ourselves and each other. We have become greedy... 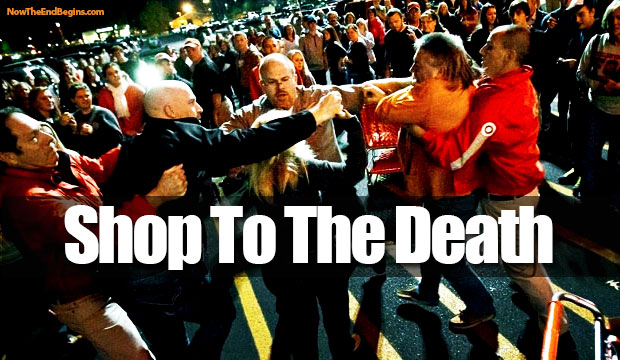 “And because iniquity shall abound, the love of many shall wax cold.” Matthew 24:12

Forget the fact that Christmas in America is no longer, and hasn’t been for quite some time, about the birth of Jesus but instead become a selfish and self-centered day of acquisitions. Events that took place in malls all over the country today reveal something that goes deeper than that. A pall has been cast over our nation, a dark and sinister chill that manifests itself in how we treat each ourselves and each other.

We have become cold and brutish as we trample each other to buy yet another luxury item we in no way need. We have become a spoiled, functionally God-less society willing to beat each other to death if someone stands in our way. We have no shame, no remorse, and no love for our fellow man.

How you can participate in this unholy mess and call yourself a Christian is beyond my comprehension. A lost and dying world is going to Hell and your only thought is to grab as much as you can as fast as you can. Jesus wept, do you?

Trampled For A $49 Tablet: Police in Utah say at least two people were knocked to the ground by a crowd of Wal-Mart shoppers jockeying for a $49 tablet computer. Lt. Dave Valentine tells The Salt Lake Tribune store employees brought out a pallet of items wrapped in cellophane, and about 200 people rushed forward to grab the items as the workers cut the wrapper. That’s when Valentine says shoppers knocked a woman over and stepped on her. Witness Brian Wilks tells the Standard-Examiner officers rushed over to help and control the crowd. source – CBS News

Man Shot For Flatscreen TV: According to police, a man purchased a big-screen television from the Target store near Flamingo Rd. and Maryland Pkwy. While he was trying to unload the TV from his car at a nearby apartment complex, a man approached and fired a warning shot, causing the victim to drop the television, police said. Officers tell 8 News NOW the gunman then took the television to a nearby car that was waiting, where a second man helped the gunman load the TV into the car. source – CBS News

Mall Shoppers Use Stun Gun On Each Other: One woman apparently used a stun gun on another after an all-out brawl inside of the Franklin Mills Mall in Northeast Philadelphia. “It started out, one couple was fighting with another couple. They had words, the guys got into a fight and then the girls,” said Napolitano, who videotaped the melee. “One couple, they were like a family  and all, with a young child in a stroller.” The video shows the two women punching each other and someone in the crowd yelling, “No, stop.” After the two hit the ground, fighting, you can hear the crackle of what sounds like a stun gun and see fluorescent-colored sparks. “One girl just brought out a taser,” the 20-year-old said. source – NBC

Salvation Army Kettle Stolen: Authorities say bell ringer James Griffin III was helping a grandmother and her four grandchildren get through the double doors of the Belk store at Hanes Mall where he was stationed. When Griffin returned to his post, the kettle and the $50 in it were gone. source – Fox News