A concert event organized by atheist, agnostic and other non-theist soldiers has been cleared by the Army to take place next spring at Fort Bragg, concert organizers and a... 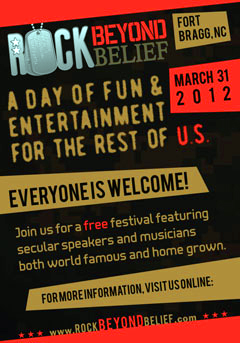 RALEIGH, N.C. (AP) — A concert event organized by atheist, agnostic and other non-theist soldiers has been cleared by the Army to take place next spring at Fort Bragg, concert organizers and a spokesman for the post said Monday.

Organizers planned to hold the Rock Beyond Belief event this year, but they canceled after saying Bragg leadership was not providing the same support it gave to an evangelical Christian concert last fall.

“You know those goosebumps you get when your favorite song hits that sweet spot? I got those,” said Sgt. Justin Griffith, main organizer of the event and the military director of American Atheists, in an email. “I was overcome with joy and a sense of vindication.”

The plan is to hold the event on March 31 at the main parade field at Fort Bragg, where the Christian-themed Rock the Fort concert was held. Famed atheist Richard Dawkins is scheduled to appear, along with musicians, speakers and other entertainment.

“This just might be the turning point in our struggle for acceptance,” Griffith said. “I mean it. I get letters daily from service members asking for advice on how to `do something like what’s going on at Fort Bragg’.”

Final approval for the event came last week, Bragg spokesman Ben Abel said. The festival will get the same treatment from Bragg that other groups receive, he said.

“Our logistical support will be the same as what we did for Rock the Fort,” he said, meaning Bragg will provide the venue, security and basic utilities. “That’s what we provide for any private organization.”

The event had its origin in the Rock the Fort concert last fall, which was organized by the Billy Graham Evangelistic Association. Groups like Americans United for the Separation of Church and State opposed the event, saying it was an unconstitutional use of military resources aimed at winning converts to Christianity. Military leaders at the time said any private event, regardless of religious orientation, would receive the same level of support, and Griffith, stationed at Bragg, decided to take them up on that.

The initial Rock Beyond Belief concert was scheduled to happen in April, but Griffith called it off after saying Bragg leadership wasn’t offering the same support it had given to the Christian event, which Bragg leaders denied. There were disagreements over the venue, the potential size of the crowd and promotional materials, but especially on the subject of funding.

This time around, organizers of the secular festival raised $50,000 for the event, which will pay for speakers and entertainers and other expenses.

“There is no going back in to the `atheist closet,'” wrote Griffith, who has also organized a local chapter of Military Atheists and Secular Humanists for like-minded soldiers and veterans. “We’re going to be supported on post for the first time.”

Bragg, home to the U.S. Army Airborne and Special Forces, is one of the military’s largest bases. It has about 58,000 uniformed military personnel and roughly 13,000 civilian workers. The surrounding community, like much of North Carolina, is home to countless churches, including some with dedicated military ministries and pastors who participated in the Rock the Fort event.

But the Army’s decision to allow Rock Beyond Belief shouldn’t be seen as threatening to religious belief, said Mikey Weinstein, president of the Military Religious Freedom Foundation, which had promised to file a lawsuit if the concert wasn’t allowed to go ahead.

Weinstein, who is scheduled to speak at the event, said that while he’s happy with the Army’s decision, his group is waiting to make sure the concert happens as planned before celebrating.

“I’m going to believe it when I see it,” he said. “We’ve been down this path before. It reminds me of Lucy pulling the football away from Charlie Brown at the last minute.” source – AP