Abunimah says "I knew Barack Obama for many years as his state senator "when he used to attend events in the Palestinian community in Chicago all the time."... 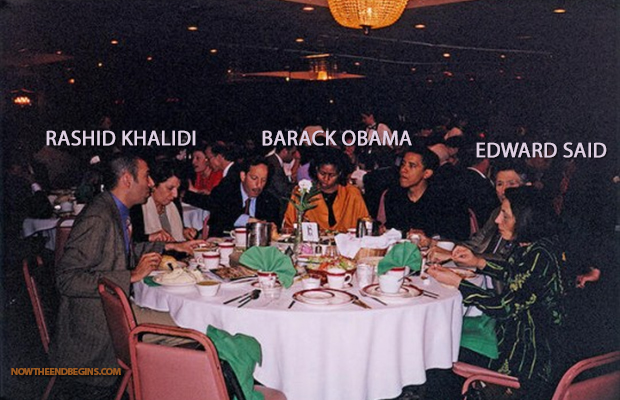 When Barack Obama was running for president, we learned he had mentor-based relationships with men who are virulently Anti-Israel

EDITOR’S NOTE: When Obama ran for president in 2008, the facts about his rampant antisemitism and his association with domestic terrorists and anti-Israel academics were public knowledge. But the detestable liberal-run main stream media ran interference for him, and marginalized anyone and everyone who dared to bring this information to light. But now here in 2015, we clearly see how much Obama hates Israel, and how much he is working to give Iran functional nuclear weapons. Well played, main stream media, well played.

We remember Bill Ayers, and how Obama played down that friendship, by saying that he knew him in passing, but was not a friend. But we found out that parties were held in Obama’s honor at the house of Ayers.

There were so many shocking revelations, but it seemed like Obama had a magic way to make them *poof* and disappear. Well, his adoring liberal media certainly helped in that magic act.

A very young, circa 1998, Barack Hussein Obama getting schooled in how to hate Israel by controversial anti-Israel professors Rashid Khalidi and Edward Said.

But do you remember this picture of the Obamas at an Arab-American dinner, along with their close friends, Rashid Khalidi and Edward Said? That’s pretty much all the public got, was a photo. The transcript of what was said at the dinner by Khalidi and Obama, along with the video tape of the evening, has been held by the Los Angeles Times in a vault. They have refused since then, to release the tape and transcript. We will probably never know what was said that evening.

If they are so adamant about not releasing that information, I can only speculate that the contents were damning to the president. I have a strong feeling that Obama’s rabid hatred for Israel and PM Netanyahu, would be better understood if we had that tape.

Democratic presidential hopeful Sen. Barack Obama is currently hiding his anti-Israel views in order to get elected, according to a well-known anti-Israel activist. The activist, Ali Abunimah, claimed to know Obama well and to have met him on numerous occasions at pro-Palestinian events in Chicago.

In an article he penned for the anti-Israeli website Electronic Intifada, Abunimah wrote:

“I knew Obama for many years as his state senator “when he used to attend events in the Palestinian community in Chicago all the time.”

“I remember personally introducing him onstage in 1999, when we had a major community fundraiser for the community center in Deheisha refugee camp in the occupied West Bank,” he recounted. “And that’s just one example of how Barack Obama used to be very comfortable speaking up for and being associated with Palestinian rights and opposing the Israeli occupation.” source

I also found a piece by a man named Khalid about his close buddy, BHO, and I think it gives us a glimpse at their relationship and Obama’s religion – ISLAM. Is there any doubt that this man is a radical Muslim?

“President Barack Hussein Obama. The 44th president of the United States was sworn in amid much pomp, circumstance, and security. Those who witnessed the event noted that this was just not a national inauguration; it was a global event.  More than two million people witnessed the event in person; millions more tuned in across the country and around the world. For many, the event symbolized hope. For the Muslims of the United States and beyond, it could mark the end of an era of verbal and physical oppression from the previous administration and its global allies.

Despite verbal support for Israel during his campaign, such a battle cry was noticeably missing from the new president’s inaugural speech. Instead, he noted that anyone who chooses to kill innocents will be dealt with accordingly. Conservatives jumped on this part of his speech and hailed it as a new warning against terrorism.

Only, Mr. Obama never mentioned ‘who’ he was talking to.  On the first day of his presidency, Mr. Obama took the necessary steps to close Guantanamo Bay. It’s a gesture in the right direction, after 8 years of an administration that vilified anyone who believed in something other than the status quo. Guantanamo Bay is set to be closed within the year. Many prisoners will be set free; those who remain will begin proceedings for trial.

As the new U.S President sets the example for the rest of the country, Muslims have been given the unique opportunity to do the same. All eyes are on the man who carries himself with grace, dignity and humility. A man who thinks before he speaks, and considers carefully the decisions that could change the direction of the country’s current course.

Perhaps it should come as no surprise, that President Barack Hussein Obama is a Syed.*

His manner of conducting business is a refreshing change from nearly a decade of split-second decisions, poorly executed plans, and smug indifference to the failings of those plans. The previous administration cost hundreds of thousands of lives; there’s an expectation that the current one may actually be able to save a few.

But there are no miracles here. No wave of the magic wand to make everything better. If Americans are not clear about anything else, they are aware that the country’s ‘change’ will not come simply because they – or Mr. Obama – will it so. He has issued a call to action for every member of society… and perhaps the world, to pitch in and take responsibility for the communities, neighborhoods, cities, countries, continents, and planet on which we live.
It will be interesting to see who answers that call.

Well, isn’t that just amazing? Obama is not JUST a Muslim, he is a direct descendant of Muhammad.

Anyone surprised that Obama is making deals with Iran, while snubbing Israel?

It’s really a no brainer.