Tamerlan says he doesn't drink or smoke anymore: "God said no alcohol." A muslim, he says: "There are no values anymore," and worries that "people can't control themselves." ... 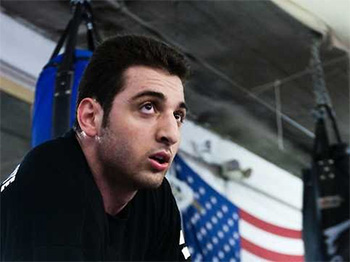 Law enforcement officials identified the suspect still on the loose as Dzhokhar A. Tsarnaev, 19, of Cambridge, Mass. His brother, Tamerlan Tsarnaev, was identified as the man killed during an encounter with police after an armed carjacking of a Mercedes SUV in Cambridge. Tsarnaev was believed to be in his mid-20s.

The brothers’ alleged motive in Monday’s bombings remains unclear, but they appear to be originally from the southern Russian republic of Chechnya, and two law enforcement officials said there is a “Chechen connection” to the bombings.

Chechnya has been racked by years of war between local separatists and Russian forces and extensive organized crime since the Soviet Union dissolved in 1991. The extent of the possible connection remained unclear.

Tamerlan says he doesn’t drink or smoke anymore: “God said no alcohol.” A muslim, he says: “There are no values anymore,” and worries that “people can’t control themselves.”

According to a database search, Tamerlan Tsarnaev was a boxer who worked out at a martial arts facility in the Cambridge area. In an Internet posting dated Nov. 2, 2011, and attributed to him by name, he wrote: “The more you know about hell, the more you want stay away from sins and keep asking Allah (s.w.t.) for forgiveness.’’ source – Washington Post