In Batgirl #19, on sale today, the character Alysia Yeoh will reveal that she is a bisexual transgender woman in a conversation with her roommate, Barbara Gordon (aka Batgirl).... 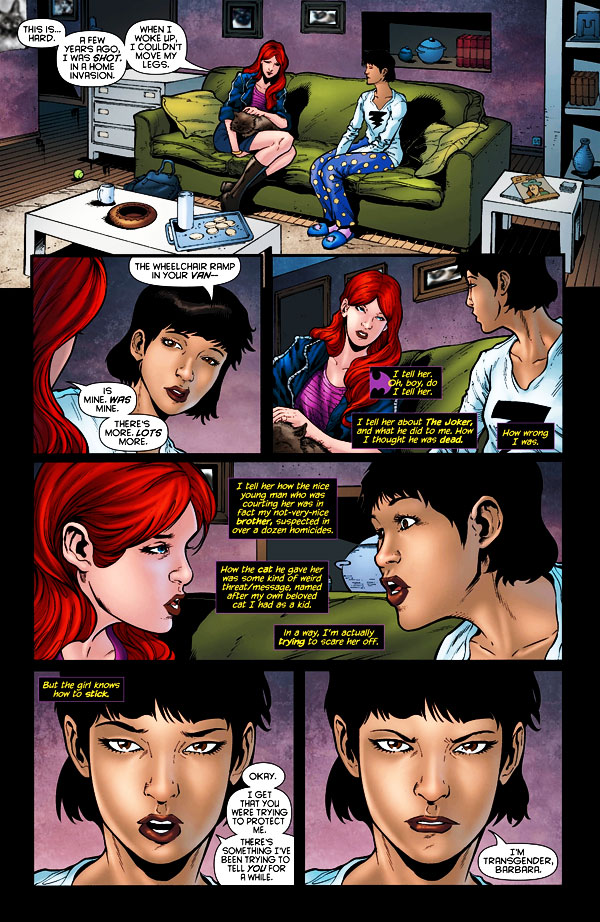 Alysia will be “a character, not a public service announcement … being trans is just part of her story. If someone loved her before, and doesn’t love her after, well — that’s a shame, but we can’t let that kind of thinking keep comics in the 1950s forever.”
by Geoffrey Grider April 12, 2013
NOW THE END BEGINS SHARE:

As In The Days Of Noah

From Wired: Once banned from the world of mainstream comic books by the infamous Comics Code Authority, LGBT characters now have a stronger presence in the world of superhero comics than ever before, with gay and lesbian heroes like Batwoman, Northstar and Green Lantern Alan Scott openly declaring who they are — and even getting married. Today, DC Comics told Wired that it will continue to expand the LGBT diversity of its superhero universe by introducing the first openly transgender character in a mainstream superhero comic.

Alysia will be “a character, not a public service announcement … being trans is just part of her story. If someone loved her before, and doesn’t love her after, well — that’s a shame, but we can’t let that kind of thinking keep comics in the 1950s forever.”

In Batgirl #19, on sale today in both print and digital formats, the character Alysia Yeoh will reveal that she is a transwoman in a conversation with her roommate, Barbara Gordon (aka Batgirl). Taking care to distinguish Yeoh’s sexual orientation from her gender identity, Batgirl writer Gail Simone noted that the character is also bisexual.

Simone attributed the inspiration for the character to a conversation she had with fellow comic book writer Greg Rucka several years ago at the Wondercon convention, after a fan asked why there were fewer gay male superheroes than lesbian ones. Rucka, who co-created (and rebooted) Batwoman as a lesbian character, replied that it would be a real sign of change for a gay male character to appear on a comic book cover — and an even bigger step for a transgender character to do the same.

“I looked out into the audience, saw dozens of faces I knew well — LGBTQ folks, mostly — all avid comics readers and superhero fans and DC supporters,” said Simone. “And it just hit me: Why was this so impossible? Why in the world can we not do a better job of representation of not just humanity, but also our own loyal audience?”

Simone suggested the story to DC Comics Co-Publisher Dan DiDio at lunch one day, prepared to offer a passionate defense for the idea of a transgender character. ”I thought I might have to sell it, so to speak,” said Simone. “But he just paused for a moment, asked how this would affect Barbara’s story, and immediately approved it. And we went back to our excellent nachos.”

Still, Simone believes that diversity isn’t just a continuing issue for superhero comics: “It’s the issue for superhero comics. Look, we have a problem most media don’t have, which is that almost all the tentpoles we build our industry upon were created over a half century ago… at a time where the characters were almost without exception white, cis-gendered, straight, on and on. It’s fine — it’s great that people love those characters. But if we only build around them, then we look like an episode ofThe Andy Griffith Show for all eternity.”

She added that she thinks most superhero comics readers don’t have a problem with increased diversity, but rather with stories that promote sermonizing over storytelling. Alysia will be “a character, not a public service announcement … being trans is just part of her story. If someone loved her before, and doesn’t love her after, well — that’s a shame, but we can’t let that kind of thinking keep comics in the 1950s forever.”

Although Alysia Yeoh may be the first ongoing transgender character in a mainstream superhero book, Simone notes that there have been transgender characters before in independent comics and mature readers titles; and even in the Marvel and DC superhero universes, several characters have achieved gender-fluidity through fantastical means like magic, shape-shifting, brain-swapping, and cloning. “Those characters exist [and] that’s great, but I wanted to have trans characters who aren’t fantasy-based. And I feel like there’s a lot there yet to do.”

To that end, Simone says she will add another transgender character to a different comic that she’s writing — though she can’t talk about which one. “It’s time for a trans hero in a mainstream comic. I think it’s time to make that thing happen that Greg [Rucka] mentioned years ago. And it’s going to happen … I’m sure it’s controversial on some level to some people, but honest to God, I just could not care less about that. If someone gets upset, so be it; there are a thousand other comics out there for those people.” source – Wired