Day of Rage as Hezbollah Gains Power in Lebanon

Hundreds of angry protesters burned tires and blocked roads across Lebanon on Tuesday after Iranian-backed Hezbollah secured the appointment of its candidate to lead the next government. Considering that... 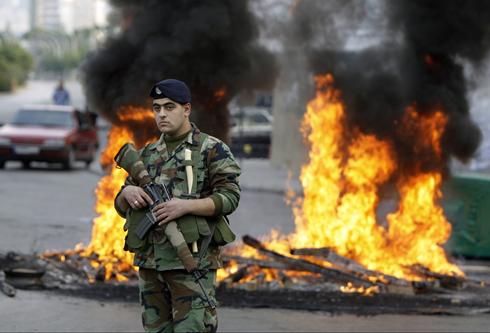 Soldiers also clashed with demonstrators in the town of Naameh, south of Beirut, and two civilians were wounded.
by Geoffrey Grider January 25, 2011
NOW THE END BEGINS SHARE:

Continued Turmoil in the Middle East

TRIPOLI, Lebanon — Hundreds of angry protesters burned tires and blocked roads across Lebanon on Tuesday after Iranian-backed Hezbollah secured the appointment of its candidate to lead the next government.

The nomination of Najib Mikati as prime minister, endorsed by President Michel Suleiman, is seen a victory for Hezbollah, which secured the parliamentary votes needed to wrest control of the Lebanese government. source: MSNBC.

Soldiers clashed with demonstrators in the town of Naameh, south of Beirut.

Considering that the United States deems Hezbollah a terrorist organization and has imposed sanctions upon the group, this new leadership will prove problematic in U.S.-Lebanon relations. “U.S. Secretary of State Hillary Rodham Clinton warned that formation of a Hezbollah-dominated government will mean changes in the U.S. political and economic relations with the country. She said cuts or realignment of military aid to Lebanon are likely if Hezbollah controls key parts of the government.” source: Yahoo! News

The appointment of Najib Mikati is igniting sectarian violence between Sunni and Shiite Muslims within Lebanon as Mikati comes from a Sunni background and is viewed as a traitor for joining forces with Shiite Iran. The long term effect of the Prime Minister’s nomination on Lebanon as a whole is yet to unfold, but for certain, the further gain of power by Hezbollah gives a boost to the influence that Syria and Iran already maintain in the region.  The power structure is shifting in the Middle East, and much of this is seen as the direct result of manipulation and destabilization directed by Iran. Just days ago, a UN tribunal announced its intent to indict Ayatollah Ali Khamenei in ordering the assassination of former Lebanese Prime Minister Rafik Hariri back in 2005.

Israel and the West must remain on high alert and quickly learn how to deal with this dynamic and ever more radical atmosphere moving forward in the Middle East.