DANGER! Palestinians Begin Riots In Ramallah Ahead Of Statehood Vote In UN

Flag-waving Palestinians filled the squares of major West Bank cities on Wednesday to rally behind President Mahmoud Abbas's bid for statehood recognition at the United Nations in the face... 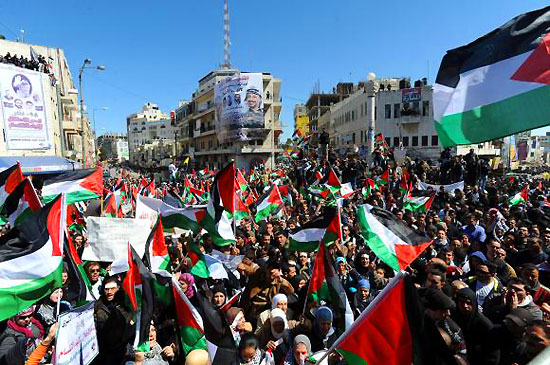 This rally will soon turn violent if the UN does not grant Palestine statehood
by Geoffrey Grider September 21, 2011
NOW THE END BEGINS SHARE:

The Arab Spring has come to Israel’s doorstep

RAMALLAH, West Bank (Reuters) – Flag-waving Palestinians filled the squares of major West Bank cities on Wednesday to rally behind President Mahmoud Abbas’s bid for statehood recognition at the United Nations in the face of U.S. and Israeli objections.

“We are asking for the most simple of rights, a state like other nations,” said Sabrina Hussein, 50, carrying the green, red, black and white Palestinian national flag at a demonstration in Ramallah.

A large mockup of a blue chair, symbolizing a seat at the U.N., and giant Palestinian flags hanging from buildings provided a backdrop for the Ramallah rally, where attendance peaked at several thousand.

Israel cites historical and biblical links to the West Bank, which it calls Judea and Samaria, and to Jerusalem. It claims all of the city as its capital, a status that is not recognized internationally.

Palestinians said more people would have showed up if the authorities had better advertised the events. They also said the political divide between the Palestinian Authority and Hamas, which governs Gaza, had curtailed the turnout.

The main venues were far removed from Israeli military checkpoints on city limits and the rallies were peaceful.

But away from the gatherings, more than a hundred Palestinian youths threw rocks at Israeli soldiers at a checkpoint on the edge of Ramallah. The soldiers responded with teargas and used a “screamer” — a device that emits an ear-splitting high-pitched sound to disperse crowds.

There also were disturbances in the divided West Bank city of Hebron.

Later in the day in New York, U.S. President Barack Obama was due to meet Abbas to urge him to drop plans to ask the U.N. Security Council to recognize a Palestinian state. Washington says statehood should be achieved through peace talks.

Abbas has said he will present U.N. Secretary General Ban Ki-moon with a membership application on Friday. The move requires Security Council approval and the United States, one of five veto-wielding permanent members, says it will block it.

At the Ramallah rally, Amina Abdel Jabbar al-Kiswany, a head teacher, said the U.N. bid was a step toward statehood, but not a solution to the decades-old Israeli-Palestinian conflict, which direct negotiations have failed to resolve.

Reflecting anger with U.S. policy, a Palestinian, his face covered by a scarf, climbed the stage scaffolding and set ablaze an American flag. Earlier, some of the demonstrators had tried to stop the flag burning.

Washington’s pledge to veto the bid for U.N. membership has added to deep Palestinian disappointment in Obama. The Palestinians have long complained of what they see as Washington’s complete support for Israel at their expense.

“America talks about human rights. They support South Sudan. Why don’t they support us?” said Tamer Milham, a 26-year-old computer engineer, referring to the new state of South Sudan which was admitted to the United Nations in July.

U.S.-brokered peace talks collapsed a year ago after Israeli Prime Minister Benjamin Netanyahu refused to extend a 10-month limited moratorium on construction in Jewish settlements in areas Palestinians want for a state.

Netanyahu has called the Palestinian demand of a halt to settlement building an unacceptable precondition and urged Abbas to return to negotiations. Palestinians hope to establish a state in the West Bank, East Jerusalem and Gaza Strip, territories captured by Israel in the 1967 Arab-Israeli war. The Palestinian Authority has held sway only in the West Bank since Hamas Islamists opposed to his peace efforts with Israel seized Gaza in a brief civil war in 2007.

Hamas has dismissed the U.N. bid as a waste of time and there were no rallies in the Mediterranean enclave, where Palestinians argue that Abbas should be devoting his energies to bridging the internal political divide. source – Yahoo News