Harold Camping has finally attracted the level of attention that he so desperately has been seeking. The eyes of the world are now focused on his (false) end times... 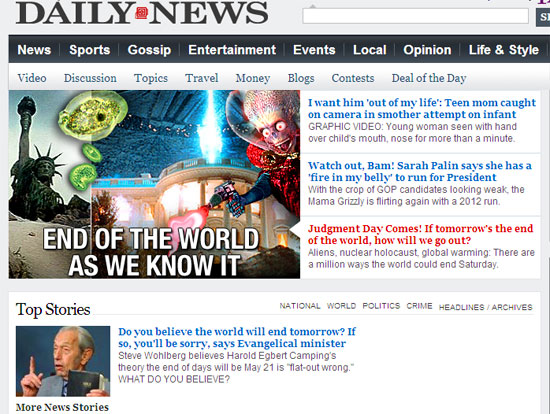 Bringing a reproach to the name of Jesus

Harold Camping has finally attracted the level of attention that he so desperately has been seeking. The eyes of the world are now focused on his (false) end times prediction that the Rapture of the church will happen tomorrow, May 21, 2011. And by doing so, he has brought nothing but mockery and disdain to the true cause of Christ.

People are paying attention to what Harold Camping has to say, and for all the wrong reasons.

“As people across the globe wait to see if the world will end Saturday, one evangelical minister says don’t panic because it won’t happen. Well, not yet, anyway. “Nobody knows the exact day when these things are going to happen,” Steve Wohlberg, who has written more than two dozen books about the End of Days, told the Daily News Thursday. Wohlberg believes the theory that the world will end on May 21, a date set by 89-year-old Family Radio founder Harold Egbert Camping, is “flat-out wrong.” “He is misinterpreting the Bible,” he said. “He’s a false teacher.”

Wohlberg argues that Camping is taking advantage of the present climate of fear. From earthquakes in Japan to storms in the southern United States to violence around the globe, people are growing concerned.

“They’re looking at all of these disasters and everything that’s going on in the planet, and this is creating a climate of deep interest in Biblical prophecy,” he said. “I think that Camping is tapping into that interest, but he’s wrong.” Wohlberg said the Bible does not give a date for the end of the world and Camping’s system for determining the date is based on “speculation” that’s a mixture of truth and fiction.

As a result, he “makes Christians out to be a laughing stock.” source – NY Daily News